GameClub Now Allows Up to 12 Family Members to Play Classic iOS Titles With One $4.99 Subscription

Subscription-based iOS gaming service GameClub today announced new changes aimed at families who are stuck at home, expanding the number of family members that can use a single subscription. 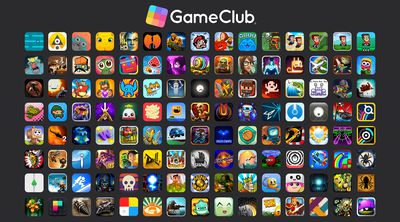 Up to 12 players can use GameClub's family sharing feature to play GameClub games with a single $4.99 per month subscription. For those who aren't familiar with GameClub, it revives older, long forgotten iOS titles so you can replay your favorite classics.

There are tons more games available from GameClub, ranging from puzzles to strategy games to RPGs and more, with more information available on the GameClub website. New games are added to GameClub on a weekly basis.


To share a GameClub subscription with family members, GameClub users will need to log in with an email address on the new device, enter a 4-digit confirmation code sent to that email address, and then enter the code on the device to confirm. It's a simple process that works outside of Apple's normal Family Sharing feature.

GameClub offers a free one-month gameplay trial, and after that, the service is priced at $4.99 per month.

Plutonius
For people stuck at home, I imagine most would prefer computer / console gaming to iOS gaming.
Score: 2 Votes (Like | Disagree)

Christoffee
Space Miner is a really great game. I bought it years ago and went back to it time after time.
Score: 1 Votes (Like | Disagree)

Sunday August 7, 2022 6:13 am PDT by Sami Fathi
Apple has "started to record" its virtual September event, where it's expected to announce the upcoming iPhone 14 lineup, the Apple Watch Series 8, and a new "rugged" Apple Watch model, according to Bloomberg's Mark Gurman. Writing in his latest Power On newsletter, Gurman says the event, which is expected to take place in the early part of September, is already under production, implying...
Read Full Article • 100 comments

Friday August 5, 2022 2:47 am PDT by Sami Fathi
You've probably experienced visiting a website like Reddit or LinkedIn on your iPhone only to be greeted with an annoying, almost full-screen pop-up urging you to view the content in their app instead of on the website. It's a common practice for websites that have accompanying iOS apps to push users to open (if they already have the app installed) or download their app from the App Store to ...
Read Full Article • 111 comments