Apple today introduced a new iPad Pro with a faster A12Z Bionic chip, a new Magic Keyboard accessory with a built-in trackpad, an Ultra Wide camera, a LiDAR Scanner, and more. In Apple's description of the new tablet, it calls it "faster and more powerful than most Windows PC laptops." 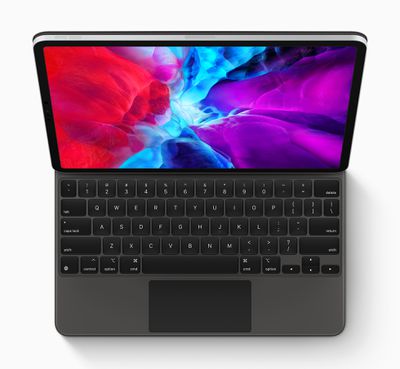 The updated iPad Pro has a new camera system that features a 12MP Wide camera and a 10MP Ultra Wide camera, which can zoom out two times to capture a wider field of view. This brings the iPad Pro family in line with the most recent iPhones, which also sport the square-shaped triple-lens camera bump.

The device's new A12Z Bionic chip supports an eight-core GPU, enhanced thermal architecture, and tuned performance controllers. Apple said that professionals working on the iPad Pro can edit 4K video and design 3D models thanks to the internal update, and the new tablet has a 10 hour battery life, faster Wi-Fi, and gigabit-class LTE that's 60 percent faster than the previous generation.

The iPad Pro is still available in both 11-inch and 12.9-inch sizes, with an edge-to-edge Liquid Retina display and ProMotion technology. The tablet also now features five studio-quality microphones and four speakers that adjust to any orientation.

The new LiDAR Scanner measures the distance to surrounding objects up to 5 meters away, and enables advanced experiences with augmented reality on the iPad Pro. Apple said this means that ARKit apps on the new iPad Pro will get improved motion capture and people occlusion, leading to AR experiences "never before possible."

Lastly, Apple is adding trackpad support to iPadOS 13.4 and the new Magic Keyboard. This new accessory attaches magnetically to iPad Pro and includes a floating design that works well on both a lap or a desk. The Magic Keyboard features cantilevered hinges for smooth adjustments of the viewing angle up to 130 degrees, including a full-size keyboard with backlit keys and a scissor mechanism that delivers 1mm travel.

The Magic Keyboard also has USB-C pass-through charging and the new trackpad. With this, Apple said that users will be able to enhance their workflows in multiple ways: scrolling through web pages in Safari, photo libraries in Photos, precisely edit text in Notes, organizing Mail, and more. Most third-party apps will work with the trackpad as well, without any update required.

The new iPad Pro is available to order starting today on apple.com and in the Apple Store app in 30 countries and regions, including the US. iPad Pro will be available in stores starting next week. The 11-inch iPad Pro starts at $799 for 128GB Wi-Fi, while the 12.9-inch model starts at $999 for 128GB Wi-Fi. More storage capacities include 256GB, 512GB, and 1TB, and cellular options are available.

shk718
I'm so happy to see Apple being Apple - releasing new products - during the mess we're in - gives a little bit of hope that we will return to "normal"
Score: 27 Votes (Like | Disagree)

terandle
Thanks Apple for making the keyboard compatible with the previous iPad Pros. Seems like the biggest upgrade to this new iPad.
Score: 19 Votes (Like | Disagree)
Read All Comments