German blog WinFuture.de today shared what it claims are "official" marketing photos of the rumored Powerbeats4 earphones, which will apparently be offered in white, black, and red color options. 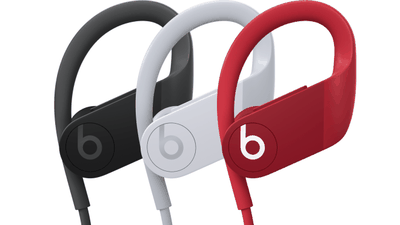 In line with Apple's recent FCC filing, the Powerbeats4 are expected to have a more curved design that is similar to the ‌Powerbeats Pro‌, with the same angled in-ear fit and wraparound earhooks. Like the Powerbeats3, the Powerbeats4 will still have a wire, although repositioned below the bottom of each earhook.

As expected, the report claims the Powerbeats4 will be equipped with the same Apple-designed H1 chip as the Powerbeats Pro, which should result in hands-free "Hey Siri" support, longer talk time and up to a 1.5x faster connection time for phone calls, up to 30 percent lower gaming latency, and more.

The report adds that the Powerbeats4 will feature the same sound quality as Powerbeats Pro, along with up to 15 hours of battery life and charging via Lightning. Pricing remains unclear, but Powerbeats Pro are priced at $249.95 in the United States, while the three-year-old Powerbeats3 retail for $199.95.

Apple received FCC approval for new Powerbeats last month, and that usually signals an upcoming release, so Powerbeats4 could be announced any day now with a press release. However, it's worth noting that with the ongoing COVID-19 coronavirus outbreak, plans are easily subject to change.

Benschoman
Hey Siri Support? That’s funny. Not even my AirPods Pro support Hey Siri. At least for 90 percent of my tries.
Score: 7 Votes (Like | Disagree)

You can get Power Beats Pro for $200 on sale pretty easily, so I'm interested in how much they'll cost.

Not that I would ever go back to a wired set.

I was going to purchase Powerbeats Pro but then I’ve come to like having the wire on my current Powerbeats. I use them for the gym solely and the wire is useful to let the earphones hang around my neck when I take them off for a moment.
Score: 2 Votes (Like | Disagree)

TwoBytes
no noise cancellation is something I’m not living without anymore. Sorry, skipping on the beats stuff now.
Score: 2 Votes (Like | Disagree)

Hey Siri Support? That’s funny. Not even my AirPods Pro support Hey Siri. At least for 90 percent of my tries.

In all seriousness you may have a microphone issue. AirPod mics have been real crappy for me. I've had to exchange it for warranty a few times.
Score: 1 Votes (Like | Disagree)

Swander038
I’m sorry but this is absurd, these are the same as Powerbeats Pro but with a wire priced at the same price point?!?
Score: 1 Votes (Like | Disagree)

japanime
These will sound great! ;)

Until Apple releases a firmware update a month later that nerfs the performance. :mad:

(Three months later, and I'm still waiting for them to fix my Airpods Pro.) :mad:
Score: 1 Votes (Like | Disagree)
Read All Comments