Photos shared on Twitter show the final stages of construction work on what will become Apple's second retail store in Bangkok, Thailand. 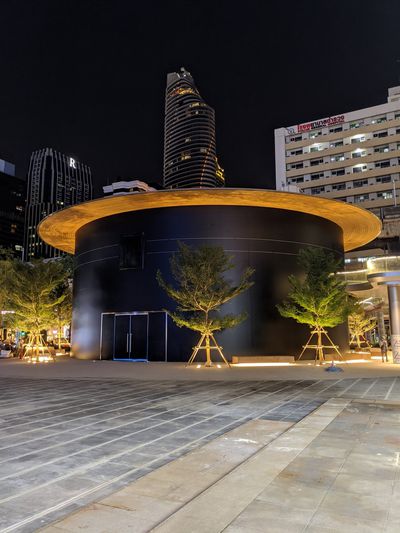 The location is in front of the Central World mall. The area, which now features a white stone courtyard, was closed to the public long before Bangkok's first Apple store, Apple Iconsiam, officially opened in November 2018.

Over the past year, a temporary wall has kept the very large cylindrical construction site shrouded in mystery, but that has recently been removed and now only a temporary black covering conceals the building's glass walls, housed under a giant flat circular roof.

The plans show a ground floor with the familiar sequoia wood product tables arranged in a ring around the shop floor and shelves for displaying products along the walls.

At the center of the store is a winding staircase to the second floor, which includes a large video screen indicating the Forum area and tables with seats for Today at Apple sessions and possibly Genius appointments. There is also a basement, which was formerly the parking lot of Central World.

Lights have been seen emanating from behind the black covering, suggesting that lighting has been installed and interior decoration is almost complete.

Given the how long it has been in development and the progress made so far, it looks like the store could open very soon. Once completed, it could well become the largest Apple Store in Southeast Asia, overtaking even Apple Orchard Road in Singapore.

Weird. Never thought Thailand would be a profitable market. Are these stores intended for the Thai or western expats and tourists?

Thailand is actually a wealthy country, it is just that most of the money and all the power is held by the traditional elites centered around Bangkok and the army. They keep having to suspend democracy because the poor majority of Thais keep voting the wrong way.

Following the latest coup six years ago, and with an odd new king charting a very different course than his father, Westerners are being phased out in favor of Chinese tourists and investors. There are still plenty of Western retirees, but most are not natural Apple customers, and most have been financially constrained by the rise in value of the Thai currency in comparison to their own. Few are in the mood to spend these days.

Thais, on the other hand, feel they gain "face" by wearing designer clothes or driving an expensive car. Most go into debt to create the impression that they have more money than they do. Owning a Macbook or iPhone gains them a lot of "face".
Score: 3 Votes (Like | Disagree)

This might be one of the most unique stores yet. I mean, there are several unique stores already, but man... This seems very cool.

I love how Apple is not just taking the copy-paste approach to their stores like 99% of chain stores do.

I've noticed a similar trend with certain gas stations here in Canada having unique designs to try and gain attention from consumers, since there's so much competition. The latest I've seen is a Shell station with large, angled Cedar beams and an open design. Quite artistic.
Score: 2 Votes (Like | Disagree)

newyorksole
This might be one of the most unique stores yet. I mean, there are several unique stores already, but man... This seems very cool.
Score: 1 Votes (Like | Disagree)

Weird. Never thought Thailand would be a profitable market. Are these stores intended for the Thai or western expats and tourists?

My best bargain was in Thailand where due to exchange rate and Apple being slow to adjust meant I could buy my wifes rMB $60 cheaper than the US and $200 cheaper than UAE
Score: 1 Votes (Like | Disagree)
Read All Comments

Thursday September 29, 2022 12:38 pm PDT by Juli Clover
Tony Blevins, Apple's vice president of procurement, is set to depart the company after he made a crude comment about his profession in a recent TikTok video, reports Bloomberg. Blevins was in a video by TikTok creator Daniel Mac, who was doing a series on the jobs of people he spotted with expensive cars. After seeing Blevins in an expensive Mercedes-Benz SLR McLaren, Mac asked Blevins what ...
Read Full Article • 658 comments