Apple is rumored to be working on a refreshed version of the 13-inch MacBook Pro following the launch of the new 16-inch MacBook Pro in October, and the new 13-inch machines could adopt Intel's 10th-generation Ice Lake chips. 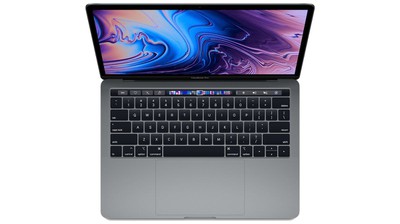 Over the weekend, a Twitter leaker shared a 3D Mark Time Spy benchmark of a machine said to be an upcoming 13-inch MacBook Pro equipped with Intel's 10th-generation i7-1068NG7 Ice Lake 2.3GHz chip with 4.1GHz turbo boost capabilities (via Wccftech).

The benchmarks compare the new 10th-generation chip to the 8th-generation 2.4GHz Core i5 chip in the high-end 13-inch MacBook Pro from 2019 and suggest the new 13-inch machine Pro will be approximately 12 percent faster than the current 13-inch MacBook Pro when it comes to CPU speeds, and close to 30 percent faster when it comes to GPU performance.

If Apple does release a 13-inch MacBook Pro with the aforementioned Ice Lake chip, it will be the first Apple notebook equipped with a 10th-generation chip. Though not included in the leak, a 16-inch MacBook Pro refresh in 2020 could also feature 10th-generation chips, though 16-inch machines are expected to use Comet Lake chips built on the 14++nm architecture as there are no 10-nanometer Ice Lake chips appropriate for them.

Rumors suggest Apple will release an updated 13-inch MacBook Pro in the first half of 2020, perhaps at its March event, though WWDC is also a possibility. Along with 10th-generation Intel chips, the new machines are expected to feature the improved scissor keyboard that was first introduced in the 16-inch MacBook Pro, along with the option to upgrade to 32GB RAM.

AustinIllini
It really all comes down to the keyboard, though...
Score: 33 Votes (Like | Disagree)

It really all comes down to the keyboard, though...

Yep, immediately after repair I traded my Macbook in and only have a Mac Mini now. I'll buy another Macbook if they ever fix the keyboard, but not until then.
Score: 13 Votes (Like | Disagree)

bladerunner2000
Why is Apple wasting their time with Intel processors and not using AMDs?
Score: 10 Votes (Like | Disagree)
Read All Comments