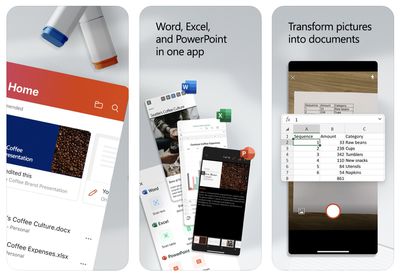 The main benefit of the unified Office app is that it requires only a single download with a much smaller file size, but it does have a few unique features, including camera integration for easily converting photos of documents and tables into Word and Excel files. The app also has a new Actions pane that supports a number of common tasks like signing PDFs and scanning QR codes.

Microsoft explains some of the benefits of the new Office app in a blog post:

- Combining Word, Excel, and PowerPoint in a way that simplifies the experience with fewer apps to download or switch between. It requires far less phone storage than installing individual apps while maintaining virtually all the capabilities of the existing mobile apps people already know and use.

- Integrating our Lens technology to unlock the power of the camera with capabilities like converting images into editable Word and Excel documents, scanning PDFs, and capturing whiteboards with automatic digital enhancements to make the content easier to read.

The new Microsoft Office app is available on the App Store for the iPhone and on the Google Play Store for Android. Microsoft says the app will be optimized to support the iPad soon. The app is free to use, even without signing in, but an Office 365 subscription starting at $6.99 per month is required to unlock premium features.

alphaswift
So if both versions remain available, which one is better to use for doc creation? Which is better if you're read-only?
Score: 8 Votes (Like | Disagree)

melgross
So Apple has to split iTunes into several apps because people complain it’s too complex, and Microsoft combines several apps into one to make it less complex?
Score: 8 Votes (Like | Disagree)

What's interesting to me is that Office used to be available through a single app, and Microsoft broke it into individual apps a few years ago. You don't often see a company - especially one this size - make a change like that only to later change back. I wonder what they saw in their internal data to prompt this? It can't all be about app size, can it?

You can see the reviews from 5 years ago in the app reviews!
Score: 6 Votes (Like | Disagree)

Achiever
What's interesting to me is that Office used to be available through a single app, and Microsoft broke it into individual apps a few years ago. You don't often see a company - especially one this size - make a change like that only to later change back. I wonder what they saw in their internal data to prompt this? It can't all be about app size, can it?
Score: 5 Votes (Like | Disagree)

So I guess you can delete the individual apps if you have this Office app then?

So if both versions remain available, which one is better to use for doc creation? Which is better if you're read-only?

Thats the million-dollar question here. Are there any differences
Score: 5 Votes (Like | Disagree)

DoctorTech
I never create MS Office documents on my iPhone but I sometimes need to open and view them when I am away from my laptop or tablet so this might be a good solution for users like me.
Score: 4 Votes (Like | Disagree)
Read All Comments

Thursday September 29, 2022 12:38 pm PDT by Juli Clover
Tony Blevins, Apple's vice president of procurement, is set to depart the company after he made a crude comment about his profession in a recent TikTok video, reports Bloomberg. Blevins was in a video by TikTok creator Daniel Mac, who was doing a series on the jobs of people he spotted with expensive cars. After seeing Blevins in an expensive Mercedes-Benz SLR McLaren, Mac asked Blevins what ...
Read Full Article • 717 comments