Apple today released the second iOS and iPadOS 13.4 betas for developers, introducing additional changes and tweaks to the operating system that are worth noting.

In the first beta, Apple added a new Mail toolbar, iCloud File Sharing, new Memoji stickers, and announced upcoming support for universal purchases for iOS and Mac apps. In this beta there's a revamped settings section for the TV app, a tweak to the toolbar, and new info on the CarKey feature Apple has in the works.

We've rounded up all of the changes that we've found in iOS and iPadOS 13.4 beta 2 so far, and we'll be adding to this list if and when new features are discovered.

Apple has updated the settings for the TV app on iPhone and iPad, adding a number of new options for controlling data downloads and streaming. 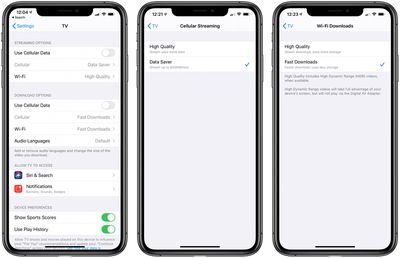 There are options to use cellular data for streaming or downloads, with those options toggled off by default. Those with an unlimited data plan may want to tweak those settings to be able to watch content in the TV app on their iPhones when using an LTE network.

There are also options to stream "Data Saver" video or "High Quality" video over WiFi or cellular, with Data Saver limiting data usage to a maximum of 600MB per hour.

Below these new settings, the standard Siri & Search and Notifications options are available, along with toggles for Show Sports Scores, Use Play History, and Video Definition, all of which existed before.

There's a subtle but important change to the way the URL bar works in Safari. In iOS 13.4 beta 2, you can tap into the URL bar right away even when a URL is highlighted, which is different behavior from iOS 13.3.1. In iOS 13.3.1, an extra tap outside of a URL was required to deselect it before it could be tapped to be edited.

Apple updated the Mail toolbar in the first beta to move the delete button away from the reply button to prevent accidental email deletion, and in beta 2, Apple has tweaked the toolbar once again. The updated toolbar does away with the flag icon from the prior beta and adds a compose button on the far right, moving the reply button over one spot to the middle. The folder and delete icons have remained the same.

Apple is working on a new "‌CarKey‌" feature designed to allow an ‌iPhone‌ or an Apple Watch to unlock, start, and lock NFC-compatible vehicles.

As was found in the first beta, ‌CarKey‌ digital keys can be shared by others, but the second beta adds new information confirming the keys will be able to be sent to people in iMessage conversations, much like Apple Cash payments.

People who are sent a ‌CarKey‌ will be able to use that digital key to access the owner's CarKey-enabled vehicle.

See a feature we missed? Let us know in the comments and we'll add it to the list.

You were expecting ground breaking in a .4 release?
Score: 15 Votes (Like | Disagree)

Apple can't win. No new features, "this is boring". New features but bugs remain, "fix the bugs first".
Get over it. I prefer dots to be fixes and that's what they're for. Not only that, this is only the second build and Apple often put in or open up new stuff near or at end of the cycle...
Score: 12 Votes (Like | Disagree)


There could be additional things not mentioned that we won't know until release either.

Read the article before commenting, don't be a troll.
Score: 12 Votes (Like | Disagree)

It’s only there if you turn on both bedtime DND and weather location permission.
Score: 4 Votes (Like | Disagree)

You're seeing skin-deep stuff. Not every change is visual. There are likely dozens of under-the-hood fixes and improvements that don't involve things that you can touch and see.

That Mail toolbar is supposed to be contextual, so putting a "Compose" button on there when you're viewing a single message is confusing. People might think that it's a way to reply to the current message, when in fact you'd be starting an entirely new message/conversation.

Not happy with some of Apple's recent divergence from user interface guidelines, but they still adhere to a higher standard than other platforms.
Score: 3 Votes (Like | Disagree)

Do people really use the native apple mail app? It is probably their worst designed and least functional app. I've been using Outlook for years and absolutely love it. It has it's annoyances here and there but it is 100x better than what Apple has created for mail. Everyone I've convinced to ditch Apple mail and switch to Outlook notices an immediate improvement in mail functionality. It's comical when non-tech savvy folks start using it and realize how bad Apple mail is.

I‘ve been using the native Apple Mail app on iOS and MacOS for years. Both have been user friendly, functional, reliable and trustworthy. While there have been occasional hiccups, these have been temporary and not significant enough to cause consideration of anything else.
Score: 3 Votes (Like | Disagree)
Read All Comments