Apple Music 'Replay 2020' Playlist Now Available, Will Update With Your Most Streamed Music Every Week

Last November, Apple launched new "Replay" playlists within Apple Music, letting its subscribers discover which songs they listened the most to every year they've been using ‌Apple Music‌. At the time of the announcement, the company said that users would be able to track their listening habits throughout 2020, and now it has made the "Replay 2020" playlist available to add to your ‌Apple Music‌ library (via Federico Viticci on Twitter). 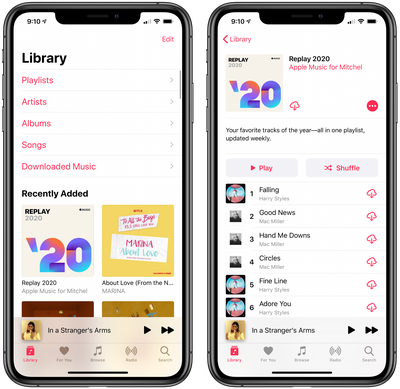 To do so, head to Apple Music on the web to get your Replays, then scroll all the way down on the page to find the yearly Replay playlists. "2020 Replay" should be the first one you see, and you can add it to your library by clicking "Add." Afterwards, the playlist will appear on ‌Apple Music‌ across your Apple devices, and as you listen to music throughout the year, new songs will rise up to the top of the playlists, and songs you don't listen to as much will descend. Up to 100 songs will eventually occupy "2020 Replay" by the year's end.

These Replay playlists are Apple's response to Spotify Wrapped, which provides Spotify users with interesting stats on who their most listened to artists, songs, genres, and more were throughout the year. ‌Apple Music‌ Replay is a bit more straightforward, listing your top 100 favorite songs of each year, but you can find more about your favorite albums and artists on ‌Apple Music‌ on the web. ‌Apple Music‌'s ability to showcase your top music from each specific year is also an advantage over Spotify Wrapped.

‌Apple Music‌‌ subscribers can access Apple Music Replay on the web and add the playlists to iOS or Mac devices. At one point, Replay was available directly from the ‌Apple Music‌ app on iOS (on the Browse tab), but this was only a temporary feature highlighting the end of 2019.

RealMonster
It baffles me that we have to do ANYTHING on the web. I use Apple music on my phone, and only on my phone. I was confused for days as to why my replay playlists weren't showing up, and then I found out that they were only available—ONLY—on the web. That's absurd. Surely it's the case that the number of people using the web interface on a regular basis versus the iOS interface (or even the desktop) is vanishingly small.

But there's not even a LINK in the iOS app to let you know. How the hell are we supposed to find out? Scrying? The Oracle at Delphi? Not everyone reads MacRumors. :P
Score: 16 Votes (Like | Disagree)

It baffles me that we have to do ANYTHING on the web. I use Apple music on my phone, and only on my phone. I was confused for days as to why my replay playlists weren't showing up, and then I found out that they were only available—ONLY—on the web. That's absurd. Surely it's the case that the number of people using the web interface on a regular basis versus the iOS interface (or even the desktop) is vanishingly small.

But there's not even a LINK in the iOS app to let you know. How the hell are we supposed to find out? Scrying? The Oracle at Delphi? Not everyone reads MacRumors. :p

Add it to the myriad of giant question marks on Apple's software lately. They are terrible with this stuff. They have an attitude that as long as something kind of works , then it works to them.

All the internal insider info the last year has pointed to much proof of it. How tons of minor bugs that have been around for months or years never get patched. Only whats deemed "major" or "show stopping" by Apple is what gets attention. So what we have now is years of half -baked stuff that mostly kinda sorta works but doesn't for most of their apps.

But now that iOS 13 has added so many features ,that just adds to the potential issues down the road.

Ironically the public beta programs was meant to remedy that.

They need a complete re-working of how they test and launch software. iOS 13 was pure proof of some sort of internal mess thats going on with the software team. Staggered iOS, iPad OS, WatchOS rollouts. Bricking HomePods, massive RAM management issues where people couldn't even use their iPad to switch apps without constant reloading.

They really need to knock it off with the yearly major iOS updates if they cant handle it. It's ok now Apple, we've reached a saturation point with phones. Every year doesn't need to have 15 blockbuster features that end up half baked. For the last two years announcing stuff that we find out later will be "coming soon" or "Later this year" or never at all.
Score: 6 Votes (Like | Disagree)

For those of us that have Apple Music, have you notice that on your receipts ? Apple started to charger two different taxes? I normally don’t look at the email receipt from Apple because I thought they were always charging me 14.99 and now it’s 16.

Taxes come from your local government, not Apple.
Score: 3 Votes (Like | Disagree)

It takes you to the following address: https://beta.music.apple.com/replay

It's beta because it's still in beta lol. Using Apple Music in the web isn't officially a thing yet. In fact, if you Google "Apple Music web player" you won't find any links from Apple about it. Only articles from tech sites that comment on it.
Score: 2 Votes (Like | Disagree)

The thing is, iOS (for iPhone) is the best thing they released last year, OS-wise. (I can't speak to the watch, I admit.)

iPad OS is still a confusing mess, and I won't even install Catalina. There's literally no upside to Catalina for me as a non-developer. I want their OSes on staggered 2-year cycles. iOS & iPad OS feature year/MacOS feature year. On 'off years', they can do bug fixes, with some small allowances to support new hardware features.

Thats exactly right and what they need to do. Like the phones. Add a couple cool things every year and perfect everything else. And keep it this way. Because what may be a bug fix heavy iOS 14, it means next year iOS 15 will then be a mess again.
Score: 2 Votes (Like | Disagree)

jonnyb098
Cool , now it would be nice if the app actually updates my weekly mixes because they’ve been gone for weeks and apple has no idea why.

My Apple Music has been a complete mess lately with for you not updating unless I close out the app or switch tabs then switch back , artwork takes forever to load.

Yes I’ve been through resetting everything, reinstalling, turning things off and on , etc etc.

Apple support is clueless. But from what I’ve been reading around the web there seems to be some serious back end server issues going on.
Score: 1 Votes (Like | Disagree)
Read All Comments

Wednesday May 5, 2021 11:03 am PDT by Juli Clover
As the Epic Games v. Apple trial progresses into its third day, Apple's internal documents and communications with various companies are continuing to surface, giving us some insight into the dealings that Apple has had around the App Store. Back in December 2018, Netflix stopped offering in-app subscription options for new or resubscribing members and instead began requiring them to sign up ...
Read Full Article • 414 comments