Lockdown, a popular open source firewall app that's designed to let users block any connection to any domain, is now available for Macs in addition to iOS devices.

Launched on the iPhone back in July, Lockdown blocks ad tracking services, analytics platforms that monitor device usage, ads, and more across all apps that you use (rather than just Safari like most ad blockers). Lockdown on iOS has blocked more than a billion trackers for Lockdown users, according to developer Rahul Dewan. 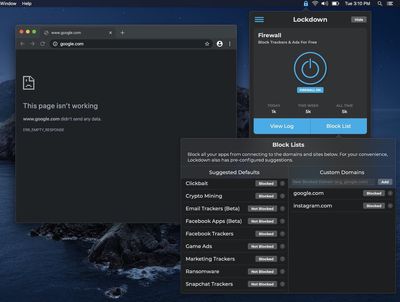 Lockdown for Mac is designed to be as simple and as customizable as the iOS version of the app. The app comes with a pre-installed list of recommended domains to block to prevent tracking, such as Facebook tracking and analytics tracking options from companies like Google and Mixpanel, but custom lists can be added as well.

The app is free to use, and since it operates on device, there is no user data collection. Lockdown is designed by the developers behind Duet Display, and it is monetized through an optional Secure Tunnel VPN service.

Lockdown can be downloaded from the Mac App Store for free. [Direct Link]

Saturnine
The positioning of that on/off button within the outer circle is going to keep me awake tonight. ?‍♂️
Score: 25 Votes (Like | Disagree)

Little Snitch only blocks/allows/monitors network traffic and connections. This blocks ad tracking that is used to target you with advertisements and analytics that are sold to marketing firms.

This app is definitly not needed if you have Little Snitch. This morning I just created my own Little Snitch rule blocking the 555 domains that Locknote is blocking (you can find the list on their github). But if you are looking for very good list for Little Snitch (with much much more domains blocked than Locknote), take a look at

The positioning of that on/off button within the outer circle is going to keep me awake tonight. ?‍♂️

Dammit! Cannot unsee. :mad: You are a monster for pointing that out.
Score: 11 Votes (Like | Disagree)

Am I missing something? It looks centered to me.

Power icons like this generally have the circle centered, without regard for the positioning of the bit that sticks up (if it does actually protrude). Your diagram shows that this is not the case here.
Score: 8 Votes (Like | Disagree)

100 Dollar subscription cost per year vs. one time.

It is only a subscription for a VPN upgrade. Our firewall is free and open source!

Lockdown for iOS is great when it’s working. Problem is, it’ll stop functioning randomly but appear to still be blocking URLs as intended. I’d hoped they’d address this before launching other projects.

For the Mac I’m wary of installing Lockdown. I used to use Duet display, made by the same developers according to the article, and enjoyed it. Until one day the Genius Bar traced kernel panics I had been having back to Duet as the source and told me to get rid of it. As soon as I did the problems went away.

Hey there - creator of Duet Display here. I am so sorry about this issue, but it was actually a macOS bug that caused a kernel panic for a very small number of users, so there was nothing we could do. We did not require any code changes, but they helped us resolve the issue in a future OS update and it has been resolved for some time now.

Its probably coded in SwiftUI which is only in Catalina.

Yes, this is exactly it. We are very limited on resources, and SwiftUI really helped us accelerate development for the macOS version.
Score: 7 Votes (Like | Disagree)

Friday November 25, 2022 4:40 am PST by Mitchel Broussard
Black Friday is winding down for 2022, but many Apple products are still seeing major discounts. In this article, you'll find every Apple device with a notable Black Friday sale. We'll be updating as prices change and new deals arrive, so be sure to keep an eye out if you don't see the sale you're looking for yet. Note: MacRumors is an affiliate partner with some of these vendors. When you...
Read Full Article • 34 comments