In our latest YouTube video, we took a look at the new Galaxy Buds+ to test them out, and we did a quick comparison with the AirPods and the AirPods Pro.

Subscribe to the MacRumors YouTube channel for more videos.
Design wise, the Galaxy Buds+ look pretty much identical to the original Galaxy Buds, but there's an extra microphone that's been added and the charging case now has a glossy finish instead of a matte finish. The size, fit, and comfort are unchanged.

The Galaxy Buds+ are closer in design to the ‌AirPods Pro‌ than the AirPods because of the soft silicone tips that fit into the ear canal to provide a tighter seal, but there is no noise canceling technology included in the Galaxy Buds+. 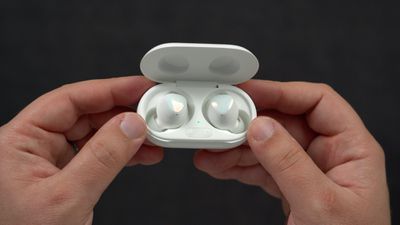 With the second-generation version of the Galaxy Buds, Samsung aimed to improve audio quality for music and phone calls along with battery life, both of which do seem to be better. The Galaxy Buds+ now last for 11 hours before needing to be recharged with the case, and the sound seems to be improved.

There are touch controls on each Galaxy Bud+ earbud, which can be used to play/pause, skip tracks, and activate voice assistants. Those are the only three functions available when connecting the Galaxy Buds+ to the iPhone, but with an Android device, the long press function can be customized to auto-launch Spotify.

Samsung also offers tools for controlling ambient sound levels (though we didn't notice much of a difference with this enabled), and adjusting the sound profile. There are a few preset options for increasing bass or treble and there's an option for making audio more dynamic or soft. There's no true equalizer function, but it's better than what's available for AirPods, which is nothing.

Galaxy Buds+ on Android can read notifications to you, a function not available when using them with the ‌iPhone‌. AirPods offer a similar function in iOS 13, allowing Siri to announce incoming messages.

Galaxy Buds+ can also be connected to multiple devices at the same time such as a TV and an Android phone so you can hear incoming notifications, but this is not a feature that works when using them with an ‌iPhone‌.

Overall, the Galaxy Buds+ audio seems to be improved and they sound better than the AirPods, but there's not a huge difference. There is a major difference in sound quality compared to the ‌AirPods Pro‌ in favor of the ‌AirPods Pro‌, but that's probably not a fair comparison given the Galaxy Buds+ are $100 cheaper and not meant to compete with Apple's noise canceling headphones.

Android users who have considered getting AirPods for their smartphones might want to consider the Galaxy Buds+ instead, but those who use both iOS and Android may still want to go for the regular AirPods because of the H1 chip functionality. The H1 chip in the AirPods and ‌AirPods Pro‌ powers hands-free "Hey ‌Siri‌" requests, improves connectivity and improves range, and also enables fast switching between Apple devices connected to the same iCloud account.

What do you think of Samsung's improved Galaxy Buds+? Let us know in the comments.

"those who use both iOS and Android may still want to go for the regular AirPods because of the H1 chip functionality."

Not sure it's fair to drop a line like that at the end of a review, without at least a mention of what the H1 chip does for those not familiar... Not everyone follows the progression of chips from W1 to H1 and so on. :)

For those wondering, a really over-simplified description is that the H1 chips help improve bluetooth connections, support "Hey Siri" and improve power use.

And Bose has been able to switch between 2 devices seamlessly without requiring H1, whereas Apple still can't figure out automatically which device I'm using and requires me to manually switch. Other than the initial pairing, I see no benefits in these chips.
Score: 14 Votes (Like | Disagree)

How is this true as I have both AirPods (Gen 2) and AirPods Pro and they sound exactly the same.
Score: 11 Votes (Like | Disagree)

somethingelsefl
remember when the forum was LIT UP with people saying AirPods were a failure. “The design is garbage” “people will lose them” “too expensive”

and now AirPods seem to be a benchmark for other competition
Score: 7 Votes (Like | Disagree)

kgelner
"those who use both iOS and Android may still want to go for the regular AirPods because of the H1 chip functionality."

Not sure it's fair to drop a line like that at the end of a review, without at least a mention of what the H1 chip does for those not familiar... Not everyone follows the progression of chips from W1 to H1 and so on. :-)

For those wondering, a really over-simplified description is that the H1 chips help improve bluetooth connections, support "Hey Siri" and improve power use.
Score: 7 Votes (Like | Disagree)

How does that work? How do Bose (you don’t specify which headset) know the difference between my MacBook Pro and Apple Watch and just start working with it?

it has two simultaneous connections to the last two devices you paired with, and picks up the sound from whatever device is broadcasting sound when you the headphones on. It's the QuietComfort 35. I don't know how they do it, but I can switch between iPad and iPhone instantly.

I would have expected Apple's approach to be smarter than that and somehow magically figure out that if start the music app on my phone and have my AirPods in that that's where I want the sound to go.
Score: 7 Votes (Like | Disagree)

metalsiren
I ordered a pair to try out.....(kind of a headset junkie) in the video he is wrong about not getting the multipoint connection... this is straight form Samsung website

it doesn't say Android only
Score: 6 Votes (Like | Disagree)
Read All Comments

Sunday February 5, 2023 6:06 am PST by Hartley Charlton
A new version of the Mac Studio with the "M2 Ultra" chip is unlikely to arrive in the near future, according to Bloomberg's Mark Gurman. In the latest edition of his "Power On" newsletter, Gurman explained that since the upcoming Apple silicon Mac Pro is "very similar in functionality to the Mac Studio," Apple may wait until the release of M3- or M4-series chips to update the machine, or...
Read Full Article • 432 comments