Darkroom today announced that it has switched to a subscription-based business model for new users, with pricing set at $3.99 per month or $19.99 per year. A one-time $49.99 purchase option is also available. A subscription provides access to all of Darkroom's filters and tools, plus any new features added later.

In a blog post explaining the move, Darkroom says existing users will continue to have access to all of the app's premium features for free. For new users, Darkroom is hopeful that the subscription model will increase its revenues so that it can hire more people and invest more heavily in its infrastructure. 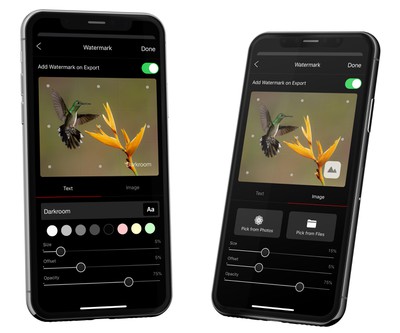 The popular photo editing app for the iPhone and iPad has also been updated to version 4.4 with new features, including a watermarking tool, a selection of custom app icons, and a photo export summary:

It doesn't hurt to have a bit of fun now and then :) Those who have been following us for a while know that every year or so we tend to give our brand a big overhaul to reflect major changes to the app. Now you can pick from old favorites or fun new interpretations of our icon.

Full-featured watermarking tool that allows you to set a text or image watermark, and control its size, location, opacity, and even typeface. More explicit form of protection, particularly in a world dominated by social media where images are often reshared without credit.

Now you can see a short summary of your most important options when exporting a photo, such as export file type and quality, is watermark or copyright metadata protection added etc.

Darkroom is available on the App Store for the iPhone and iPad.

trainwrecka
I've seen this cycle before. We are currently at step 5.

3. Update app for free for years.

4. Switch to subscription, because money isn't being made.

For new users, Darkroom is hopeful that the subscription model will increase its revenues so that it can hire more people and invest more heavily in its infrastructure.

More likely, a fair number of people in the future who would've considered a one-time expenditure to purchase this app will now not even look at it.
Score: 12 Votes (Like | Disagree)

I’d be embarrassed if I made issue with a $20 per year subscription fee. Developers have to keep the money rolling in to make money to improve the product. Photo editing apps are not like games that have gazillions of players.

You’re absolutely right, they don’t have millions of people playing their game but they also don’t add millions of new updates either or require servers to continue to run for a photo editing app. Charge a one time fee and disclose that this one time fee is only good for a few years and then major features require in-app purchases going forward after that, problem solved.

People have had it with subscriptions. There’s way too many. Apps are becoming terrible for it. I like many others don’t even look at an app again once I see it requires a subscription. Sure you can be embarrassed making issue about the $20 a year fee. I won’t be because $20 a year coupled with 10 other apps along with all my other subscriptions is getting outta hand and I can’t afford it.

jonnyb098
Its a great concept of an app but honestly its just so full of silly bugs to be reliable or be an end all solution.

Apple has added SO much editing capability in ios 13 that its more than enough for 90 percent of people.
Score: 9 Votes (Like | Disagree)

gsurf123
I’d be embarrassed if I made issue with a $20 per year subscription fee. Developers have to keep the money rolling in to make money to improve the product. Photo editing apps are not like games that have gazillions of players.
Score: 6 Votes (Like | Disagree)
Read All Comments