Apple today seeded the first public betas of upcoming iOS and iPadOS 13.4 updates to its public beta testing group, a few days after releasing the updates for developers.

Beta testers who have signed up for Apple's beta testing program will be able to download the iOS/iPadOS 13.4 beta update over-the-air after installing the proper certificate on an iOS device. 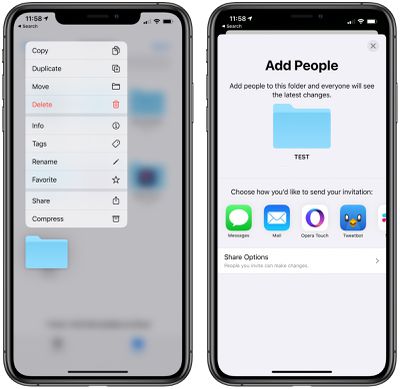 iOS and iPadOS 13.4 introduce some useful and notable new features and changes. There's a new Mail toolbar that separates the reply button from the delete button to make it harder to accidentally delete emails, there's a new "Shazam It" shortcut in the Shortcuts app for identifying songs, and some tweaks have been made to CarPlay controls for calls and third-party navigation apps.

There are a total of nine new Memoji/Animoji stickers that can be used wherever emoji can be used, and Apple has made minor changes to Location Services to appease app developers who want to encourage customers to turn on the "Always" option for Location Services for apps that need it.

Apple has added support for universal app purchases, which means developers can sell a single app across iOS, tvOS, and macOS. For apps that enable this feature, customers will be able to make one purchase and then download an app across all applicable platforms.

There are hints of a new "CarKey" API, which is designed to allow the iPhone or the Apple Watch to be used in lieu of a traditional car key in vehicles that support NFC.

For the iPad specifically, Apple has introduced new keyboard shortcuts for the Photos app for navigating between tabs, search, creating albums, deleting photos, and entering Edit mode, plus there's a new feature for hardware key remapping in iPadOS.

For a full rundown of everything that's new in iOS and iPadOS 13.4, make sure to check out our complete feature list.

Mick-Mac
I'll take any FIX to Mail they dish out. In the name of all things good and holy, please just fix Mail...
Score: 9 Votes (Like | Disagree)

motm95
Ya'll might want to try out Outlook for iOS as an alternative. I prefer it over Mail. And don't let the word "Outlook" scare you - it has nothing to do with MS Outlook for Windows.
Score: 9 Votes (Like | Disagree)

Ya'll might want to try out Outlook for iOS as an alternative. I prefer it over Mail. And don't let the word "Outlook" scare you - it has nothing to do with MS Outlook for Windows.

How does it not have anything to do with MS Outlook when it's made by MS and called Outlook?
Score: 8 Votes (Like | Disagree)

crizzly
It's hard to believe Mail has gone a few months now with such buggy mail fetching. I am considering switching to another mail client at this point but it's too bad we cannot set a default mail handler to have email links open in a third party client. I have a feeling we will need to wait till iOS 14 for a fix to buggy Mail app.
Score: 6 Votes (Like | Disagree)

Because Outlook for iOS was originally an email app from Accompli until that company was bought by Microsoft. So the iOS version is not related to the bloated nightmare that is the desktop client.

Of course it's unrelated to the Windows desktop app because one is a Win32 desktop application and the other is an iOS application. I don't think anyone would even think they're related in that sense.

As for bloated, Outlook 2016 on my computer is currently using less RAM (actually, almost 3x less RAM) than the single tab open to Gmail in my browser.
Score: 5 Votes (Like | Disagree)
Read All Comments