Amazon's Echo speakers continue to be the most popular smart speakers in the United States, and will remain in the dominant spot through at least 2021, according to new smart speaker user estimates shared today by eMarketer (via TechCrunch). 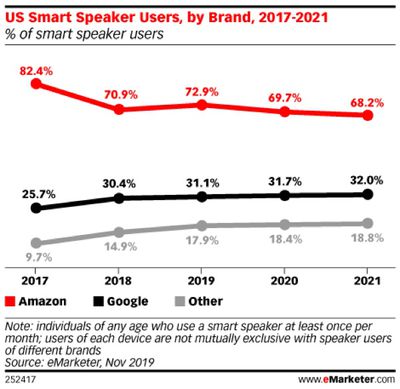 Note: eMarketer says the percentages total over 100 percent because some smart speaker owners have more than one brand.
Google is expected to make some headway against Amazon, but eMarketer does not believe that the "Other" category, which includes Apple's HomePod, the Sonos One, and other smart speakers, will gain significant ground over the next two years.

Since Amazon first introduced the Echo, it has built a convincing lead in the U.S. and continues to beat back challenges from top competitors," said Victoria Petrock, a principal analyst at eMarketer. "We had previously expected Google and Apple to make more inroads in this market, but Amazon has remained aggressive. By offering affordable devices and building out the number of Alexa skills, the company has maintained Echo's appeal," she added.

eMarketer expects the number of U.S. smart speaker owners to grow over the next several years, but ownership numbers will rise slowly. 28.9 percent of internet users also have a smart speaker, a number that will grow to 30.5 percent next year.

Though Apple's ‌HomePod‌ recently turned two, Apple has had some difficulty securing a foothold in the smart speaker market. Apple's ‌HomePod‌ was priced at $349 when it launched in February 2018, but Apple dropped the price to $299 in April 2019. Even at $299, the ‌HomePod‌ is significantly more expensive than Amazon's Echo lineup, which includes smart speakers at multiple price points. Amazon's lowest priced device, the Echo Dot, sells for $30 and sometimes dips even lower.

Apple was hoping that the superior sound of the ‌HomePod‌ would draw customers to pay extra for sound quality, but the more affordable prices of the Amazon Echo and Google Home have been more appealing to most consumers. Amazon doesn't have quite the same advantage in non-U.S. markets because it supports fewer non-English languages than other speakers like the Google Home, so that is an area where Apple could make inroads into the smart speaker market.

Apple is rumored to be working on a new, more affordable version of the ‌HomePod‌ with reduced tweeters, which could be released at some point in 2020. A lower price point will help the ‌HomePod‌ better compete with the Amazon Echo and the Google Home, but it will likely be difficult for Apple to catch up given the lead Amazon and Google have in the smart speaker market.

topgunn
My wife and I were joking about many smart devices we have now. I laughed. My wife laughed. Alexa laughed. Good times.
Score: 31 Votes (Like | Disagree)

Not even factoring in special priced deals, Amazon offers:

Apple completely priced themselves out of the market with the $349 price tag.
Score: 18 Votes (Like | Disagree)

Braderunner
The HomePod isn't good enough for audiophiles, and, it's too expensive for everyone else.
Score: 15 Votes (Like | Disagree)

ipponrg
Apple's HomePod is a good example of confused identity.

Some said it's a speaker first, but you can't connect to it via Bluetooth nor with an aux. You also can't tweak the EQ settings, and you have to trust Apple's tunings. Certain "audiophiles" said this is the best sounding speaker ever for its price range, but it seems they also thought BOSE sounded great too.

Then others have said it's a smart speaker with privacy focus, then Apple got caught with contractors listening to recordings.

I still feel that if Apple prices this much lower AND removes Siri AND is less dependent on the Apple ecosystem, people like me would buy it. If not, then it will continue to be what it is today.
Score: 10 Votes (Like | Disagree)

mannyvel
I wish I could use Siri, but I can't. Alexa is really just better©. The most frustrating thing is that Siri won't read content to you; it'll forward you to a web page. I mean crap, if I wanted to read a web page I'd have searched for it on my phone.

Does Siri work better on a HomePod? On the phone it's just really bad.
Score: 9 Votes (Like | Disagree)
Read All Comments