Apple in December began testing an expansion of its more detailed Apple Maps app in the Central and Southeastern parts of the United States, along with Alaska, and that updated Maps content is now rolling out to all customers. 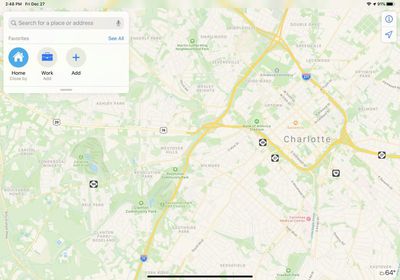 To get its mapping data, Apple uses its own vehicles equipped with LIDAR sensors and cameras. Apple has been using this method to collect mapping information for years now.

Apple began rolling out its updated mapping app to customers starting in iOS 12, and at the 2019 Worldwide Developer Conference, Apple said all customers in the United States would receive the improved Maps app by the end of the year.

Apple has made good on that promise with the rollout of the new mapping terrain to large swathes of the United States, and the updated Maps are now becoming available across most of the country. It could still take some time for all users in the Central and Southeastern areas of the U.S. to see the new content. Apple plans to bring the new Maps app to additional countries in 2020.

Update: Though Apple has begun releasing the new mapping updates across the United States, updated Maps features are not yet showing up for all users in the Southeast at this time.

Update 2 — Jan 30, 2020: The rollout of revamped ‌Apple Maps‌ in the Southeast and Central United States now appears to be complete. This includes the addition of traffic lights and stop signs in ‌Apple Maps‌ on CarPlay.

malcolmffc
So that’s the whole world covered then.
Score: 11 Votes (Like | Disagree)

Its good they are making progress, but the fact is, they will forever be behind google.

Apple plans to bring the Maps app to additional countries in 2020.

take your time, Apple. Take your own sweet time.
Score: 7 Votes (Like | Disagree)

Rogifan
Is there a way to turn off dark mode just for the Maps app? I fund it much harder to read in dark mode.
Score: 6 Votes (Like | Disagree)

Westside guy
The single thing that's kept me from switching away from Google's maps is that Google's display of traffic congestion information is easier to grok at a glance. Google adopted the standard green-yellow-red-black paradigm most of the older traffic display systems used, and it's just easier to quickly comprehend.

I notice that, with the revamp, Apple's at least gotten rid of that annoying system of dashes they used to use. But still, it seems like they're trying to be different just for the sake of being different, and sacrificing quick visual interpretation because of it.
Score: 6 Votes (Like | Disagree)

meaning-matters
I keep saying it: Maps are unreadable because of the use of very light colors. Especially slightly less light yellow for roads on light yellow background; unbelievable.
Score: 6 Votes (Like | Disagree)
Read All Comments