The lab is equipped with "mind-bending hardware" and a team of technology experts, many of whom are ex-military. The facility itself features a radiofrequency isolation chamber that prevents iPhones being used in investigations from being accessed remotely to keep them from being wiped. 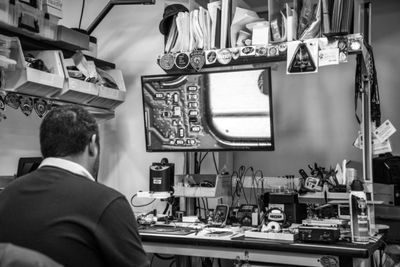 Vance's team has thousands of iPhones at the facility in various stages of being cracked. There's a supercomputer that generates 26 million random passcodes per second, a robot that can remove memory chips without using heat, and specialized tools for repairing damaged devices to make them accessible once again.

All of the iPhones are hooked up to computers that are generating passcodes in an effort to get into the iPhones, and sometimes that requires going through tens of thousands of number combinations. Those who work at the facility, including director Steven Moran, also attempt to narrow down possibilities using birthdays, significant dates, and other info that could be used in each specific case for an iPhone passcode.

Proprietary workflow software tracks all of the iPhones at the facility, including their software and their importance, for the purpose of deciding which ‌iPhone‌ to work on and which might be able to be cracked using a newly found third-party solution.

Vance has been a major critic of Apple and has called on the government to introduce anti-encryption legislation to make it easier for law enforcement officials to get into iPhones needed for criminal investigations. According to Vance, 82 percent of smartphones that come into the unit are locked, and his cybercrime lab can crack "about half."

Apple's frequent software updates continually make breaking into iPhones harder by making the process more complicated, which can make it close to impossible to breach an ‌iPhone‌ in a timely manner. "The problem with that, particularly from a law enforcement perspective, is, first of all, time matters to us," said Vance.

Vance believes that it's "not fair" that Apple and Google can prevent law enforcement officials from accessing smartphones. Vance says that law enforcement is entrusted with a responsibility to "protect the public" but Apple and Google have limited access to information "just because they say so." Vance is of the opinion that there should be a "balance" between protecting user privacy and getting justice for victims of crimes.

"That's not their call. And it's not their call because there's something bigger here at issue rather than their individual determination of where to balance privacy and public safety. What's bigger is you've got victims and you've got a law enforcement community who have strong imperatives that should be recognized and balanced equally with the subject decision-makers by the heads of Apple and Google. Today, I think it's unbalanced.

Apple's argument is that it provides ‌iPhone‌ data from iCloud without breaking into the ‌iPhone‌ itself, but Vance says that a serious criminal doesn't have an ‌iCloud‌ backup. A user can also choose what information is stored remotely, and "in many cases" smartphones do not backup between the time when a crime takes place and an ‌iPhone‌ is shut off.

Law enforcement officials can also obtain device metadata like the time and location of a phone call from SIM cards or phone carriers, but Moran says that's the difference between being able to read a letter and being limited to just the envelope the letter came in.

Vance says that he's not "whining" about the encryption problem, but his lab is "not the answer" as most of the U.S. can't afford to do the work that the New York cyber lab does.

Fast Company's profile of Vance's cyber lab comes as Apple is gearing up for another battle with the FBI. Apple has been asked to unlock the iPhones used by Florida shooter Mohammed Saeed Alshamrani, and while Apple has provided ‌iCloud‌ data, the company will fight requests to unlock the actual devices.

For more on New York's High Technology Analysis Unit and facility, make sure to check out Fast Company's full profile.

crawfish963
I'm on record as a law enforcement officer to say that I do not agree with private companies being forced to create backdoors to get into people's devices. If the agency or government comes up with a method on their own, or purchases it from the private sector, then that's fine. But putting a gun to a company's head must never be allowed.
Score: 72 Votes (Like | Disagree)

benshive
This almost reads like an ad for iPhone security. Thanks for taking the side of your customers, Apple. :)
Score: 51 Votes (Like | Disagree)

GalileoSeven
Color me shocked - yet another gov't stooge who doesn't understand you can't crack one iPhone without compromising every other as well :rolleyes:
Score: 36 Votes (Like | Disagree)

nt5672
No problem with the lab. The cry baby attitude of its leader is a real problem. It's obvious that laws and the constitution don't mean anything to him because they make his job harder. Well too bad.
Score: 31 Votes (Like | Disagree)

techwhiz
So they have a faraday cage ad they use intelligent social engineering to get a start at passwords, okay.
The answer is not a backdoor that he is asking for.
For everyone that reads this you need an alphanumeric passcode.

My current passcode has 12 digits/letters and symbols.
This means that even if they can generate 26 million passcodes a second.

There are 46 keys * 2 functions for each key.
This means that my password will has 3.68x10^23 combinations.
This is 1.4x10^16 seconds to brute force the attack or 3.9x10^12 hours.
So they will never brute force it unless they just get lucky.
Couple that with at the end of every attempt, the enter key must be used.
If you use a 4 digit passcode, a brute force attack renders it useless in 9999 attempts.
Actually it's half that if the approach is either sequential or starts from the middle.
A six digit passcode isn't better.
Use a password that has letters (upper and lower case) numbers and symbols.

A password that is any length is more secure than a passcode.
A password can be any length and makes it much more difficult to brute force.

If you use a less secure 4/6 digit passcode, you should have your phone set to wipe after 10 attempts.

I say don't give them a chance and I'm not doing anything illegal.
My right to privacy, is a right.
Score: 30 Votes (Like | Disagree)

Solomani
NYC spending $10 million for such a stupid anti-consumer intrusive purpose.... they could have spent it instead on the countless homeless and vagrants roaming the streets of NYC.
Score: 25 Votes (Like | Disagree)
Read All Comments