Apple is considering creating original podcasts focused on TV shows and movies from its Apple TV+ streaming service, reports Bloomberg. The podcasts would be used to promote ‌Apple TV+‌ content. 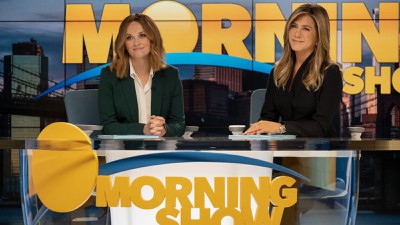 Apple's streaming TV service, which launched in November, has less content than other streaming services like Hulu, Disney+, and Netflix, so podcasts could provide Apple with a way to draw in new viewers. Though Apple is new to streaming TV, some of its shows, like "The Morning Show" have already earned award nominations and wins.

‌Apple TV+‌ competitor Netflix creates podcasts that offer behind the scenes looks at TV shows, so Apple could potentially offer something similar for its own shows.

Apple's plans have not been finalized, and it's not clear when ‌Apple TV+‌ podcasts might start rolling out if Apple does indeed decide to continue on with the project.

Doctor Q
How about an Apple podcast about the behind-the-scenes negotiations and decision making that determine which shows are added to Apple TV+?

Just think of the intrigue, the suspense, the cliffhangers, and the surprise outcomes!
Score: 5 Votes (Like | Disagree)

Can anyone imagine NetFlix doing this

Can anyone imagine people actually reading the article before replying?

Apple TV+ competitor Netflix creates podcasts that offer behind the scenes looks at TV shows, so Apple could potentially offer something similar for its own shows.

Eduardo1971
This would be awesome-I LOVED, the podcast for the HBO miniseries Chernobyl.

A podcast of that caliber would only help to increase viewership rates for Apple TV+ shows.
Score: 3 Votes (Like | Disagree)

rmoliv
Apple TV+ needs a blockbuster if it wants to thrive. Focus on that.
Score: 3 Votes (Like | Disagree)

Valmont11
I just discovered that The Morning Show is the actual title of the show we get to experience as The Morning Wars here in Australia!
Score: 2 Votes (Like | Disagree)

subjonas
How far Amy and Rachel have come.