Asphalt 9: Legends, a game that was ported to the Mac using Apple's Mac Catalyst tools, is now available for download from the Mac App Store.

The app was one of the titles that Apple promoted when macOS Catalina and Mac Catalyst technology were introduced at WWDC in June, but the app did not launch as expected when ‌macOS Catalina‌ became available. 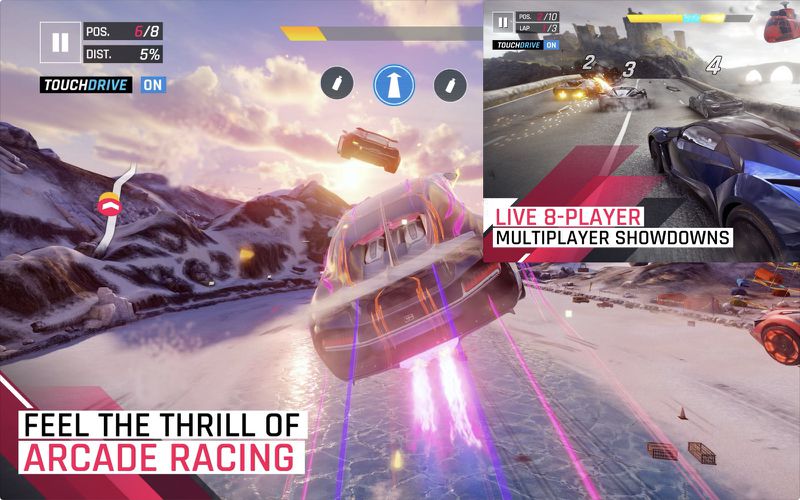 At the time, Gameloft said that Asphalt 9: Legends had been slightly delayed in order to polish the experience, and after a wait of several months, the game has now launched.

Because this is a Mac Catalyst app, players who already have Asphalt 9: Legends on iPad or iPhone can pick up their game on the Mac and swap between devices when playing thanks to cross-platform saves.

According to Gameloft, Asphalt 9: Legends will have content parity across devices going forward, so the Mac and iOS apps will be updated simultaneously.

Asphalt 9: Legends can be downloaded from the ‌Mac App Store‌ for free, though there are in-app purchases. [Direct Link]

acorntoy
These games used to be fun. Then came the explosion of IAP ?
Rating: 5 Votes

This is actually great.

These are the kind of seamless experiences you just don't get on other platforms.

Or how about Android and Chromebook?
Chromebooks can play Android apps without them needing to be repackaged at all. You can go from Android phone to Chromebook and use the exact same app and have a native experience.

I get this is an Apple forum, but other platforms also have seamless experiences that rival or exceed what is being offered here.

Even cross platform... Thanks to the cloud you don't need to be tied to one OS or ecosystem now. Android phones play amazingly nice with Windows and the Windows 10 your phone app bringing messaging, notifications, calling and even control of your android phone to Windows 10. Chromebooks offer similar features to access messaging and sharing of notifications. And then you have individual apps, you can work on Microsoft word whether it be on your iPad, Linux web browser, android phone or windows desktop and thanks to office 365 it's synced and up to date on whatever os app you use. Ditto with synced note taking apps, Google office suite, cross platform game saves etc.
Rating: 3 Votes

In app purchasing spoils every app I’ve ever downloaded from the app store and no doubt this will be the same so will skip this thanks.

Greedy developers charging well over the odds for stupid unlocks. Kids apps are some of the worst offenders and Apple and the devs should be ashamed of themselves.


And that’s the whole point of Apple Arcade, where no IAPs exist, and I’m really thankful for it.

There are a lot of complete games with no microtransactions in the AppStore, but they’re rare compared to the sheer volume of waiting/collecting games. Arcade is a simple way of finding a lot of good ones.
Rating: 3 Votes

Can’t innovate any more my a**.


Well then that sounds like a you problem with hiding your cards away and not leaving it in plain site or punish your kids of using it without your permission take away there phones for a week
Rating: 1 Votes

cardfan
Unfortunately this appears to be apples goal with catalyst. Bring the subpar in app crap to the Mac.
Rating: 1 Votes
[ Read All Comments ]