Some travelers on the New York City subway who have enabled Apple's Express Transit feature on their iPhones are reportedly being hit with unintentional MTA charges when they walk near the tap-and-go fare readers. 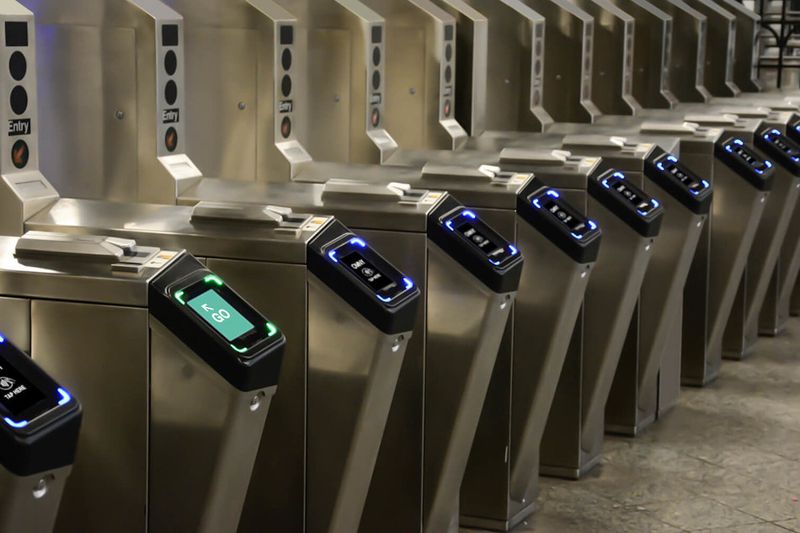 Express Transit is an Apple Pay feature that allows users to pay fares with a swipe of their iPhone or Apple Watch at the turnstile without having to unlock their device first with Face ID, Touch ID, or a passcode.

But according to the New York Post, the OMNY tap-and-go fare readers that the MTA installed have been taking charges from some commuters when they used contactless cards and their iPhones were pocketed or in a purse.

Megan Bagg, 29, of SoHo, told The Post she has been charged twice — despite having her phone in her bag.

"It was ridiculous. My phone was in my purse near my hip," she said.

Bagg said she at first blamed the charge on her contactless credit card — and even called the bank to complain — until the second charge occurred when it wasn't on her person.

"I've been keeping my purse far from the thing when I go through the turnstile," she said.

Another subway user told The Post that he had had a similar experience swiping in with his MetroCard at Grand Central Terminal when his iPhone was in his pocket, and only noticed the doubled-up charge when later reviewing their bank statement.

MTA confirmed to the paper that "about 30 customers" had complained about unintended charges when the Express Transit feature of their iPhones is activated. The authority said it is working with Apple on a solution to address "the issue of unintended taps."

Apple says it has not had the issue in other cities where the Express Transit feature is available, so the problem seems to be down to the hypersensitivity of the NYC subway's tap-and-go readers. If you're a NYC subway user and you're concerned about being hit by bogus charges on your ‌iPhone‌ when paying with a card, you can turn off Express Transit until the issue with the terminals is fixed.

Aluminum213
People actually expected the MTA to pull something off that works? LMAO
Rating: 6 Votes

confirmed
I used Express Transit twice in December, worked perfectly.. no additional transactions. Oddly, I received a refund for both of them a couple days ago. No idea why, though I now wonder if they're proactively giving refunds for people who used OMNY terminals that have been deemed to be hyper sensitive.
Rating: 4 Votes

dapa0s
Why is the US so much behind on contactless payment? Or is this something else?
Rating: 4 Votes

I used Express Transit twice in December, worked perfectly.. no additional transactions. Oddly, I received a refund for both of them a couple days ago. No idea why, though I now wonder if they're proactively giving refunds for people who used OMNY terminals that have been deemed to be hyper sensitive.

Did you use it on a Friday? They did this early in the summer and then again December - if you used a MasterCard, MasterCard refunded up to two trips per Friday as a promotion for OMNY being turned on at new stations.
Rating: 3 Votes

One potential way to reduce the issue is for the turnstile to disable the reader for five seconds whenever someone exits.


Oh ya, that would go over well with the crush of people behind you waiting to use the turnstile. LOL
Rating: 2 Votes

nexesnex
NY Post sometimes enjoys writing sensationalized stories.... this might be one. I wonder how they got a hold of that person with the bag, or if she even truly exists...
Rating: 2 Votes

People actually expected the MTA to pull something off that works? LMAO

MTA has been in operation for what, 100 years or so? I’m sure during that time they might have done at least 1 thing right, no?
Rating: 2 Votes

Michael Williams
I was wondering why I received a refund last night!
Rating: 2 Votes

dz5b609
Weird story, the range on NFC really isn't far enough (we're talking 6 inches tops in ideal circumstances ie not in a bag) to be on mistake, so unless these people were hanging on terminals or walking right past them (both of which are weird things to be doing) without going in there's something else going on.
Rating: 2 Votes
[ Read All Comments ]