Corellium Accuses Apple of Using Lawsuit to 'Crack Down on Jailbreaking'

Apple is currently involved in a lawsuit against Corellium, a mobile device virtualization company that supports iOS. Apple has accused Corellium of copyright infringement because Corellium creates software designed for security researchers that replicates iOS.

The lawsuit has been ongoing since August, but it is heating up after Apple amended its lawsuit in late December with a Digital Millennium Copyright Act (DMCA) filing, suggesting the Cupertino company believes jailbreaking is a violation of the DMCA. Corellium, says Apple, facilitates jailbreaking through its software. 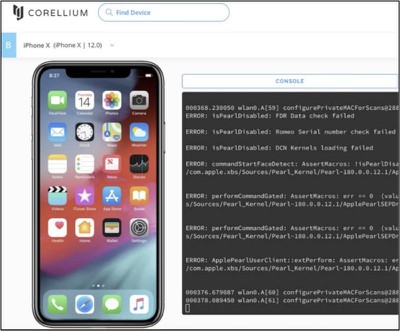 A virtual ‌iPhone‌ on Corellium's website used as evidence in Apple's lawsuit against the company
Corellium's CEO Amanda Gorton has taken issue with Apple's new filing, and yesterday penned a missive lambasting Apple for its jailbreaking position. "Apple's latest filing against Corellium should give all security researchers, app developers, and jailbreakers reason to be concerned," reads the letter's opening statement.

The filing asserts that because Corellium "allows users to jailbreak" and "gave one or more Persons access... to develop software that can be used to jailbreak," Corellium is "engaging in trafficking" in violation of the DMCA. In other words, Apple is asserting that anyone who provides a tool that allows other people to jailbreak, and anyone who assists in creating such a tool, is violating the DMCA. Apple underscores this position by calling the unc0ver jailbreak tool "unlawful" and stating that it is "designed to circumvent [the] same technological measures" as Corellium.

Gorton accuses Apple of using its Corellium lawsuit to "crack down on jailbreaking" and claims Apple is seeking a precedent to eliminate public jailbreaks. She says that Corellium is "deeply disappointed" by Apple's "demonization of jailbreaking" as developers and researchers "rely on jailbreaks" to test the security of their own apps and third-party apps. She further claims that Apple has benefited from jailbreaking by turning jailbreak tweaks into ‌iPhone‌ features.

Not only do researchers and developers rely on jailbreaking to protect end users, but Apple itself has directly benefited from the jailbreak community in a number of ways. Many of the features of iOS originally appeared as jailbreak tweaks and were copied by Apple, including dark mode, control center, and context menus.

In addition, jailbreak creators regularly contribute to the security of iOS. The developer behind the unc0ver jailbreak was acknowledged and credited by Apple for assisting with a security vulnerability in the iOS kernel - a vulnerability he discovered while using Corellium.

Gorton says that Corellium is prepared to "strongly defend" against Apple's attack, and looks forward to sharing a formal response to Apple's claims in court.

Apple is continuing to seek a permanent injunction to prevent Corellium from offering a product that replicates the iOS operating system. Apple wants Corellium to destroy all infringing materials that it has collected, and pay Apple damages, lost profits, and attorney fees.

CarlJ
Headline has a typo. It should read:

So here's the deal: do we want our phones to be secure or not? If we want them to be uncrackable, then we should support Apple on this lawsuit. If we really want to jailbreak them (for what?), then we are giving up security. Cant have both.

Ha! That premise is both false and silly... mostly silly. There never has been, nor will there ever be "uncrackable". Supporting Apple won't change that at all. Most understand that. So by all means, support Apple if that is your want. Just please don't use that "uncrackable" nonsense as a reason. Security is a game of one-upsmanship. Security get's better by being challenged out in the open.

Not really sure how, when, or where you formed your opinion about jailbreaking and having security. It's just plain wrong. You can have both. Evidence is the fact that we do have both and have had both for years. Probably gonna continue to have both for the foreseeable future.
Score: 18 Votes (Like | Disagree)

lockhartt
I’m definitely with Apple on this one. I’m tired of companies that exist simply to exploit or steal the intellectual property of others.
Score: 14 Votes (Like | Disagree)

MikeMo
So here's the deal: do we want our phones to be secure or not? If we want them to be uncrackable, then we should support Apple on this lawsuit. If we really want to jailbreak them (for what?), then we are giving up security. Cant have both.
Score: 11 Votes (Like | Disagree)

Curious. What exactly do you think is indefensible about their business practices?

They created an emulator to duplicate iOS. Then they lied by trying to say this is about jailbreaking and accusing Apple of being against jailbreaking. That’s NOT what Apple is saying.

What Apple says is Corellium can’t make an iOS emulator. It’s irrelevant if someone uses that emulator to aid in making a jailbreak, to do security research or just to test new features.
Score: 10 Votes (Like | Disagree)

They created an emulator to duplicate iOS. Then they lied by trying to say this is about jailbreaking and accusing Apple of being against jailbreaking. That’s NOT what Apple is saying.

What Apple says is Corellium can’t make an iOS emulator. It’s irrelevant if someone uses that emulator to aid in making a jailbreak, to do security research or just to test new features.

Thanks. I understand exactly what they did. I even read it in the article too. :D My question to Carl was what does he think was indefensible.

Why would anyone who would has any clue what jailbreaking even is want to use an iOS device in the first place? Just use Android where you can customize and side load all you want. iOS is the property of Apple. No one has the right to modify it as they wish.

That's akin to saying if you want your Mustang faster, go buy a Hellcat. :rolleyes::D Telling someone to move to Android doesn't actually sate their desire to modify iOS.
Score: 10 Votes (Like | Disagree)
Read All Comments