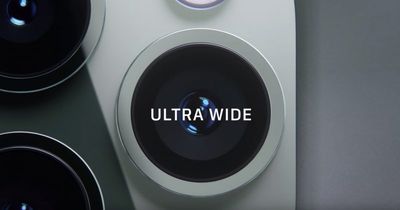 While details are slim, sensor-shift technology could bring image stabilization to the ultra-wide lens on high-end 2020 iPhones.

iPhone 11 Pro models feature optical image stabilization for both photo and video, but only when using the wide-angle or telephoto lenses. Sensor-shift technology could change this, as the stabilization would apply to the camera sensor itself and not be dependant on any specific lens.

The report backs rumors that the high-end 6.1-inch and 6.7-inch iPhones will each sport a triple-lens rear camera system with time-of-flight 3D sensing. Largan Precision is said to be the primary supplier of the lenses, fulfilling 80 percent of orders, with Genius Electric Optical picking up the remaining 20 percent.

Taiwan-based ALPS will supply motors for the sensor-shifting stabilization, and Sony will offer CMOS image sensors, the report adds.

BootsWalking
There's another benefit to implementing sensor-shift - ultra-high resolution imaging by taking multiple exposures with the sensor shifted a pixel or 1/2 pixel between exposures. It's only feasible in good light, so that the burst can be done quickly and at fast shutter speeds, unless the users mounts the camera/phone on a tripod.
Score: 7 Votes (Like | Disagree)

alexandr
seems like the 2020 model is going to be everything that the 2019 model should've been!
Score: 6 Votes (Like | Disagree)

seems like the 2020 model is going to be everything that the 2019 model should've been!

Why? The 2019 iPhone was the first to introduce the ‘triple lens camera’, wouldn’t you expect Apple to build off of that for the 2020 year? That seems feasible. Considering that they ration their features annually, there’s zero reason the 2019 iPhone _should_ be the 2020 iPhone, when it’s an incremental building process.
Score: 5 Votes (Like | Disagree)

Mousse
You guys claiming ultra wide not needing IS probably don't drink 50 cups of coffee before a photo shoot.;)
Score: 4 Votes (Like | Disagree)

ruka.snow
Ultra wide tends not to need IS as camera shake doesn’t impact the final image like it does when you are dealing with a telephoto. IS in general is good in the 70mm + range or their equivalent phone camera range.
Score: 4 Votes (Like | Disagree)

Why? The 2019 iPhone was the first to introduce the ‘triple lens camera’, wouldn’t you expect Apple to build off of that for the 2020 year? That seems feasible. Considering that they ration their features annually, there’s zero reason the 2019 iPhone _should_ be the 2020 iPhone, when it’s an incremental building process.

The 2021 iPhone will be everything the 2020 iPhone should have been.
Score: 3 Votes (Like | Disagree)
Read All Comments