Nine months ago, Apple unveiled its Apple News+ service, designed to let ‌‌Apple News‌‌ users access over 200 magazines and some paywalled news content for a $9.99 per month fee. Apple keeps 50 percent of this fee and the remaining revenue is split among publishers based on the amount of time readers spend with each publisher's content. 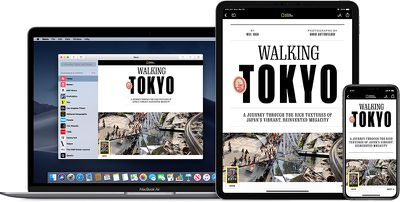 However, a new report by Digiday looking at the popularity of ‌Apple News‌+ suggests that most publishers remain underwhelmed by the paid subscription service and so far aren't seeing the results they'd hoped for.

According to the report, the news service is having little impact on publishers' bottom lines, and although it has generated some additional revenue and enabled them to reach more international audiences, overall publisher revenues generated from ‌Apple News‌+ are modest.

One publisher told Digiday that revenue was less than $20,000 a month, but the desire to keep the subscription numbers up meant it was worth renewing the contract with Apple next year.

"We're happy to be on there because it's another way to increase subscription revenue, but it's not like it's a huge boon for our business or anything like that," one magazine exec said. "It's not really relevant."

Another publisher said they were "encouraged" by the results since joining ‌Apple News‌+ and that it had helped them grow their audience outside of the U.S., but declined to say how many subscriptions they'd added because of the platform.

"I think the jury is out," said Roger Lynch, Condé Nast CEO said at Code Media in November, about Apple News+. "I think that … the paid side of it has had some adoption and I think Apple will continue to focus on that. Whether it's good for publishers like us or not is to be determined."

Two days after the service's launch in March, Apple reported 200,000 new subscriptions for ‌Apple News‌+, but hasn't offered any more subscription numbers. One report last month suggested that Apple has struggled to attract subscribers to its news service, although the company isn't expected to dramatically change its ‌Apple News‌+ strategy.

That said, Bloomberg reported in November that Apple is considering bundling ‌Apple News‌+ with Apple TV+ and Apple Music, which could mean users see perceive it as offering better value for money. Have you signed up for ‌‌Apple News‌‌+ and do you plan to keep the subscription? Let us know in the comments.

ghostface147
There just isn't anything compelling enough on News +. People consume news differently now, for better or for worse.
Score: 11 Votes (Like | Disagree)

Exile714
I would imagine Apple News+ lost a lot of subscribers because the interface is poor. Magazines have two types of content: those found in the table of contents which can be accessed by tapping on them, and content which can only be found by browsing. Sure, the app looks nice, but the problems are 1) surfacing articles of interest is difficult because search and indexing are non-existent, and 2) even browsing articles is a challenge because this forces users to page through a sea of ads.

I think this design decision was purposeful, and done to appease magazines who didn’t want to lose ad revenue by making all their content easily searched AND browsed. They compromised the user experience by limiting systems that would make both browsing and searching easier, but in the end all that did was 1) make most people think there was less content than there was, and 2) make it impossible for the few who knew what else was there to quickly access that hidden content.
Score: 9 Votes (Like | Disagree)

confirmed
I subscribe and enjoy it for the clean, distraction-free interface for WSJ and 5-6 magazines. But it's definitely lacking in some features to make it more enjoyable to use and easier to discover content:

* Full Article Search - The current search feature is extremely limited.
* Saved reading place - Many magazine articles are very long and I don't always have time to read them in one sitting. Saving my place within the article and syncing that across devices is sorely needed. This is especially needed as this app mixes up-to-date news and magazines, if I want to get an update on breaking news when I'm mid article, I then have to find my place again once I go back.
* Single sign-on with the news source's website & app OR direct linking to Apple News for all News+ articles - If someone shares a New Yorker article with me, I should be able to open it with my News+ subscription in one click, whether that's access within newyorker.com (via Sign in with Apple?) or directly opening the article in News+.
* Picture in Picture support for Video - I want to be able to continue watching a video while I switch to other apps, or even while I browse through different articles within Apple News. Odd that I can do this with a CBS News video on cbsnews.com, but Apple News won't let me do this with the same video.
* Multiple Windows support on iPad - This would help with the issue of keeping a long form magazine article open, while also browsing late breaking news. Similar to above, strange that Apple doesn't support iPadOS multi-tasking features in their own app.
Score: 6 Votes (Like | Disagree)

masterleep
Needs more newspapers and someone with a brain to design the UI.
Score: 5 Votes (Like | Disagree)

News consumption is not the same as it used to be. While we are going through a paradigm shift, big players like Apple, Google, etc. will throw in the offerings that they think will change things in a big way going forward. But even they are throwing darts up in the air aiming to hit the bull's eye. It is a waiting game and maybe a long drawn until we are on the other side of this tectonic shift.

Not to mention, I bet a lot of people in the US have a "news fatigue" of sorts stemming from the constant coverage of what's going on in our government. I know I've been avoiding the news almost completely, except for occasionally catching up on things as I still want to stay informed.

It's depressing and stressful and I bet most people don't want to hear about it anymore. There's a reason my Feedly is 99% tech/science sites.
Score: 4 Votes (Like | Disagree)