Tuesday December 17, 2019 8:06 am PST by Joe Rossignol
Apple plans to open a revamped 10,287-square-foot store at Fairview Mall in Toronto, Canada, nearly twice as large as its existing store in the mall, according to a recently updated floor plan for the property.

Apple has yet to announce a grand opening date for the new store, which will be located directly beside the existing store on level two of the mall. The floor plan indicates the new store is "coming soon." The existing store, originally opened in September 2008, should close after its replacement opens.

In addition to being larger, the new store should sport Apple's modern retail design, such as a Forum and Video Wall for Today at Apple sessions, large glass doors, and wooden shelves along the walls for accessories. 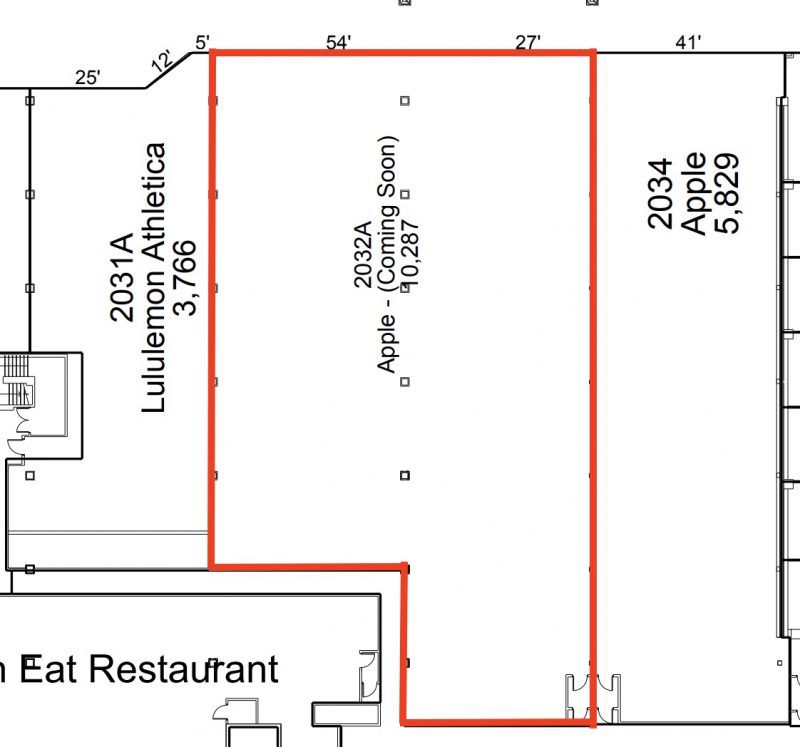 The new Fairview Mall store would follow in the footsteps of Apple's new Eaton Centre store in Toronto, which opened last weekend.

Apple has been modernizing its chain of over 500 retail stores since 2015.

DiGiNeXita
I nearly doubled in size too and I'm also from Taranto; so how come MacRumors never did a post about me?
Rating: 5 Votes

classicalbear
About time. It was one of the smallest Applestore I’ve ever seen.
Rating: 2 Votes

Daniel James
I wish there were more real Apple stores rather than third-party resellers.

lunarworks
It's not in as dire need of expansion as the Eaton Centre location was, but it still gets pretty packed.


I still think they should have put one on Queen Street where Le Chateau used to be.
Rating: 2 Votes

Its so fascinating that this is the only technology company store that is successful. MS, Sony, Bose, etc all dont survive.

And people continue to say Apple is doomed. I hope people are realizing that Apple literally has like the best formula. Their products, vision, stores, services... Theres no other company that has the influence/wealth that Apple does.
Rating: 2 Votes

I wish there were more real Apple stores rather than third-party resellers.

I agree. Like in Scarborough Town centre there's a Jump+ premium Apple reseller, but their return policy was ****. Everything final sale, no returns.
Rating: 2 Votes

It opened on Dec 14 if I'm not mistaken... 3 days before this article was posted. Sheesh.


You are mistaken. You're thinking of the Eaton Centre.

Edit: they also literally reference the Eaton Centre at the end of this article, lol
Rating: 1 Votes

WannaGoMac
Its so fascinating that this is the only technology company store that is successful. MS, Sony, Bose, etc all dont survive.

I think everyone who replied missed your sarcasm.

I think you didnt understand. I was saying just their stores dont do well, not the company itself
Rating: 1 Votes

Toronto is the fourth largest city in North America, ahead of Chicago, and until last week had one reasonable Apple store and two completely insufficient ones, so it's pretty arrogant to say it's less newsworthy than a fart, especially since we also get articles whenever a store is upgraded in other major cities around the world.

Relax and take a step back. I’m not saying the other “grand opening articles” were newsworthy and that this one isn’t. Come on...

A retail store opening *never* makes national/global news unless it’s the very first one, or the plug has been pulled on the retail operation altogether.

My point had nothing to do with your city—it could’ve been any city—my point concerned how surprising it is to see news coverage (including a floor plan) related to a (“kind random in the scheme of things”) retail store in the first place—and how this may be a sign of how powerful Apple’s retail strategy really is.

Are you from Toronto? Because I’m not used to this kind of [name deleted]-style insecurity coming from an honest, hardworking, friendly, God-fearing northern neighbor. (You have a higher standards to live up to than us animals who live to your south.) XD
Rating: 1 Votes