Steve Carell and Billy Crudup, who play Mitch Kessler and Corey Ellison, respectively, have been nominated for the Outstanding Performance by a Male Actor in a Drama Series award. 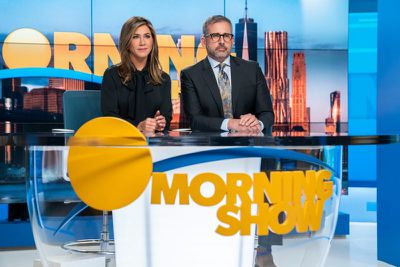 The two will be competing against Sterling K. Brown (Randall Pearson) from "This Is Us," Peter Dinklage (Tyrion Lannister) from "Game of Thrones," and David Harbour (Jim Hopper) from "Stranger Things."

Jennifer Aniston, who plays Alex Levy, was nominated for Outstanding Performance by a Female Actor in a Drama Series. Reese Witherspoon, who plays Bradley Jackson in "The Morning Show" was not nominated.

Aniston will be competing against Helena Bonham Carter (Princess Margaret) and Olivia Coleman (Queen Elizabeth II) from "The Crown," Jodie Comer (Villanelle) from "Killing Eve," and Elisabeth Moss (June/Offred) from "The Handmaid's Tale."

Apple has also received several Golden Globe Award nominations for "The Morning Show," including a nomination for best drama series. Both Reese Witherspoon and Jennifer Aniston have been nominated for best actress in a drama series Golden Globe awards as well.

"The Morning Show" is the only one of Apple's TV shows to receive award nominations in 2020, and it is the series with the most notable cast. Prior to launch, "The Morning Show" received less than stellar reviews from critics, but it has fared better with audiences.

bpeeps
I'm enjoying the show so far. Just goes to show how cynical and negative this community is. I guarantee they get nominated for a few Emmys in the fall of 2020 as well.
Score: 12 Votes (Like | Disagree)

triangletechie
Hollywood awards are meaningless. It's the industry patting each other on the back. Often times it's like a political process. Are some of you going to run to your friends and tell them how awesome it is that a show got some SAG nominations? No one I know gives 2 rips about movie/tv awards.

Mindhunter is without a doubt one of the best tv shows out and it got 0 SAG nominations.
Score: 11 Votes (Like | Disagree)

I'm not sure I would want the nomination for an award called the "SAG" award.

I realize it stands for screen actors guild but call the award something else.

It is one of the most prestigious awards in the business. I think they are fine with the way it is.
Score: 10 Votes (Like | Disagree)

e-coli
This is a seriously good show.
Score: 9 Votes (Like | Disagree)

Peepo
What about the Film Actors Guild?
Score: 8 Votes (Like | Disagree)

SAG Aawards? Who's the most saggiest actor/actress?

I mean you totally crashed and burned a good joke there.
Score: 6 Votes (Like | Disagree)
Read All Comments