Apple plans to release the new Mac Pro and the Pro Display XDR on Tuesday, December 10, according to "Save the Date" emails that Apple began sending out to some customers this afternoon. 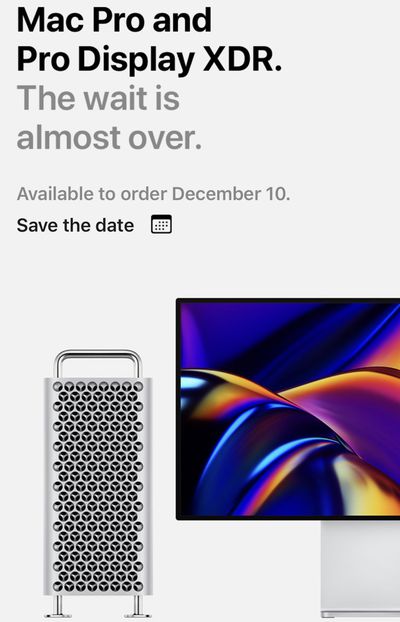 Apple in November confirmed that the ‌Mac Pro‌ and Pro Display XDR would come in December, but until now, the company had not provided a specific date. Apple's emails say orders will begin on December 10, so presumably shipments will begin soon after orders open up.

The new modular ‌Mac Pro‌ was first introduced in June at the WorldWide developers Conference, with the machine aimed at Apple's pro user base.

The ‌Mac Pro‌ was designed with a heavy focus on upgradeability and expansion, and it features a traditional PC shape with an Apple-esque stainless steel frame with a lattice pattern that maximizes airflow.

Internal specs include workstation-class Xeon processors with up to 28 cores, up to 1.5TB of high-performance memory, up to two Radeon Pro II Duo GPUs, and eight PCIe expansion slots, along with an Apple Afterburner accelerator card.

Pricing on the ‌Mac Pro‌ will start at $6,000, and will go up based on configuration. The base ‌Mac Pro‌ features an 8-core Xeon W chip.

GizmoDVD
Finally. All several hundred people can buy the Pro and we can stop hearing about “when will they update it”
Score: 67 Votes (Like | Disagree)

I can build my own using parts from Newegg for half the price and it’ll be twice as fast. /s
Score: 35 Votes (Like | Disagree)

Reed Black12
Wow! There's some jealousy and envy in this thread! Haha!
I've been waiting for this machine for nearly 10 years! Already set aside the money for it. Very excited!

For those complaining about the cost, sorry, it's not for you. It's not. This machine was specifically catered to a specific segment of the entertainment industry: Editors, mixers and yes graphic designers. Sure you can use a Macbook Pro, but when deadlines are tight, you need something faster.

I've been editing professionally for 20 years now and I've worked at facilities with literally over 100 Mac Pro editing stations. For us editors it's MacPro's 2013 and or MacPro 5,1. For assistant editors its all iMacs. Hollywood will pay for something they know will scale and last for years without issue. That being said...

Consider this. The OLD MacPro's are STILL in use at almost every major production company here in LA. We're talking machines from 2009! And the 2013 Mac Pro is also STILL widely used. That being said $6000 grand for a machine that will more than likely last you over a decade, I'd say is a pretty good deal. That breaks down to....
about $50 bucks a month for 10 years! So, I'm all in. I'll upgrade the guts as my needs change.
Score: 29 Votes (Like | Disagree)

What industry other than video are you thinking? 3D? No. ML/AI? No. Cad/cam? No. All for the same reason: no Nvidia CUDA cores. Other than that, no graphic designers or illustrators are going to blow $30-45k When they’ll be fine on a MBP. This is a video only machine for actual pro use.

Well...I score film and TV and have been looking for a machine like this to produce my orchestral scores in for years to replace my 2012 MacPro Tower.

Hundreds and hundreds of orchestral tracks streaming off solid state drives in Digital Performer and also ProTools, locked to video while driving three 4k monitors. Currently using multiple MacMini slaves to help house all the orchestra. Looking forward to likely getting it all into one machine.
So there. Not a video editor. But this is the “upgradable” OSX machine we have been hounding them for a long while as well.
Score: 28 Votes (Like | Disagree)

D.T.
I will __finally__ have adequate performance for posting updates on Facebook ...
Score: 28 Votes (Like | Disagree)
Read All Comments

Sunday January 23, 2022 2:59 am PST by Tim Hardwick
Apple has always emphasized the depth of thought that goes into the design of its products. In the foreword to Designed by Apple in California, a photo book released by the company in 2016, Jony Ive explains how Apple strives "to define objects that appear effortless" and "so simple, coherent and inevitable that there could be no rational alternative." But every once in a while even Apple...
Read Full Article • 421 comments

Monday January 24, 2022 9:20 am PST by Juli Clover
AT&T today announced the launch of upgraded AT&T Fiber plans, which support speeds of up to 5 Gigabits for some customers. There are two separate plans, one "2 GIG" plan and one "5 GIG" plan, available to new and existing AT&T Fiber subscribers. According to AT&T, the new plans are available to nearly 5.2 million customers across 70 metro areas including Los Angeles, Atlanta, Chicago, San...
Read Full Article • 217 comments

Monday January 24, 2022 7:12 am PST by Sami Fathi
Three months after their launch, the 14-inch and 16-inch MacBook Pros continue to experience high demand and seemingly short supply, with shipping dates for both models stretching into multiple weeks in several of Apple's key markets. In the United States, the baseline 14-inch MacBook Pro with the M1 Pro chip is estimated to ship in three to four weeks, promising an arrival by at least...
Read Full Article • 186 comments