Intel today announced it has completed the sale of the majority of its smartphone modem business to Apple for $1 billion following regulatory approval. The transaction was first announced in July and includes intellectual property, equipment, and approximately 2,200 Intel employees joining Apple. 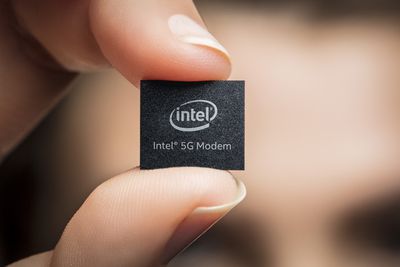 Intel will retain the ability to develop modems for non-smartphone applications, such as PCs, internet-of-things devices, and autonomous vehicles.

Last week, Intel admitted that it sold its smartphone modem business to Apple at "a multi-billion dollar loss," according to court documents unearthed by Reuters. Intel added that rival chipmaker Qualcomm's patent licensing practices "strangled competition" and effectively forced it to exit the market.

Apple is expected to use Qualcomm modems for its first 5G-enabled iPhones next year, as part of a six-year licensing agreement between the companies. Farther down the road, multiple reports have claimed that Apple plans to develop its own modems for iPhones by 2022-23, and this Intel deal would certainly help those efforts.

On the other hand, building a cutting edge modem requires making calculated calls on where the industry will move and having deep knowledge of the relevant standards, and any non-standard enhancements, that would allow interoperability with carrier equipment. Since Apple doesn't build carrier equipment, they will likely always be trailing the competition.

The wireless standards track is well-known by all the players, and there aren't really that many choices you have to make. And Apple has some experience being on the cutting edge of wireless: they were the first vendor to ship 802.11. And in any case the standards are, well, standards. No equipment vendor in their right mind wouldn't allow Apple into their interoperability labs.

The real question, though, is if it's really worth it for Apple to be in the modem business at all. That business relies on economies of scale and a lot of engineering and wireless expertise.

I'd guess the goal is to do what it did with Bluetooth and the W1, making the modem low-power. Radios are a big power draw, and I doubt Qualcomm or Intel were willing to make a power/performance tradeoff. At some point that could become yet another competitive advantage for Apple.

I mean, they could probably save a bunch of power just by optimizing the modem's software stack. Most of those modems are driven using the Hayes AT command set, which means you need some kind of serial emulator. Apple could rip out that interface layer and go direct to the modem, which would make it more efficient, which should lead to better power/performance.

If they did it for BT/WiFi they should be able to do it for LTE/5G/6G and beyond.
Score: 10 Votes (Like | Disagree)

guzhogi
I'm curious to see what kind of performance an Apple-made modem would have, assuming Apple makes one.
Score: 6 Votes (Like | Disagree)

I'm curious to see what kind of performance an Apple-made modem would have, assuming Apple makes one.

Hopefully it's as good as their A-series chips. Can't be any worse than Intel's offerings.
Score: 5 Votes (Like | Disagree)

jz0309
No surprises there.
I also think Apple designed modems will be several years out
Score: 5 Votes (Like | Disagree)

fokmik
So now, starting with 2021 probably we will have macs with 5G built in
Score: 5 Votes (Like | Disagree)

Would you rather have the A13 or the Snapdragon 855?
Score: 4 Votes (Like | Disagree)
Read All Comments

Sunday February 5, 2023 6:06 am PST by Hartley Charlton
A new version of the Mac Studio with the "M2 Ultra" chip is unlikely to arrive in the near future, according to Bloomberg's Mark Gurman. In the latest edition of his "Power On" newsletter, Gurman explained that since the upcoming Apple silicon Mac Pro is "very similar in functionality to the Mac Studio," Apple may wait until the release of M3- or M4-series chips to update the machine, or...
Read Full Article • 538 comments