Following a brief initial teardown of the 16-inch MacBook Pro on Friday, repair site iFixit today shared its full teardown of the new machine, giving us insights into the changes that Apple has made with the keyboard and other components.

The new MacBook Pro features the largest display that Apple has introduced in the MacBook line since the 17-inch MacBook Pro was discontinued, and it also features a brand new scissor keyboard called the Magic Keyboard, a new thermal architecture, and some other design tweaks. 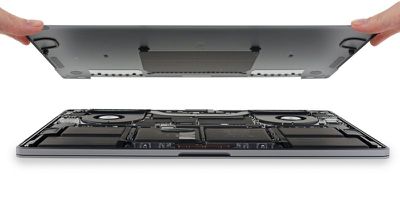 When it comes to the keyboard, Apple has reverted to the same scissor switch mechanism used in older MacBook Pro models and the standalone Bluetooth Magic Keyboard for the iMac. It's slightly thinner than the prior scissor key design, but iFixit says the two scissor mechanisms look identical other than the thickness and some keys between the two keyboards are even interchangeable.

Scissor switches are more reliable than butterfly switches and are not prone to breaking from dust or other small particulates. In fact, iFixit says there's no dust-proofing membrane on these keys, suggesting Apple doesn't expect these keyboards to fail.

Aside from the new scissor switch mechanism, the keyboard looks quite similar to the keyboard from the prior MacBook Pro, though there is a separate physical Escape key, a separate Touch ID button, and an updated inverted "T" design for the arrow keys. Underneath, there's an Apple-designed rubber dome, a backlight assembly, and a black gasket for blocking out excess light.

The keyboard assembly is riveted down, which means the keyboard itself isn't more repairable than the butterfly keyboards, even though they're less prone to failure.

Apple added a new speaker system to the MacBook Pro, and there's a longer speaker enclosure with opposed woofers on the top and bottom, which are meant to cancel out each other's vibration. iFixit isn't sure why there's a longer enclosure, but speculates that it's to redirect sound to improve quality. The new three microphone array is also "beefier," but otherwise the same as what was found in the 15-inch MacBook Pro.

Apple is using a 99.8Wh (11.36V, 8790mAh) battery in the 16-inch MacBook Pro, which is the largest capacity that's still allowed on planes by airlines. That's a 16.2Wh increase over the prior 15-inch MacBook Pro and the largest battery that's ever been used in a MacBook. To get the extra capacity into the new machine, Apple made each battery 0.8mm thicker.

Overall, the MacBook Pro earned a repairability score of 1 because the processor, RAM, and storage are soldered to the logic board, while the keyboard, battery, speakers, and Touch Bar are secured with glue and rivets.

iFixit's full teardown of the 16-inch MacBook Pro, which has some additional information on the internal components of the machine, can be read on the iFixit website.

Cmon people, complain more, I know you can do it

The complaint is the ease of repairing an electronic device to reduce waste and extend the longevity of it, instead of a full recycle of a component such as the entire top case which includes the keyboard, battery, speakers, touch bar, etc. Of course, if you're already a wasteful person, don't care about the environment, nor future generations other than just what appeases you while you're alive, then I'm sure you are absolutely fine with these unnecessary engineering designs. It does reduce cost to Apple though and makes them more of a profit than the design which allows more modular individual components. Speakers blown; replace the top case. Key sticking; replace the top case. Battery degraded and requiring replacement; replace the top case. Touch Bar inoperative; replace the top case....
Score: 33 Votes (Like | Disagree)

Cmon people, complain more, I know you can do it

Praise where praise is due, criticize where criticism is due.
Score: 32 Votes (Like | Disagree)

LeeW
Cmon people, complain more, I know you can do it
Score: 31 Votes (Like | Disagree)

while the keyboard, battery, speakers, and Touch Bar are secured with glue and rivets.

StellarVixen
1. One. For a laptop. If it was phone and tablet, maybe I would accept it. But laptop...
Score: 20 Votes (Like | Disagree)

CrazyForCashews
Considering the weight of this thing, it would've made no difference if Apple made the parts removable with good old screws.

And in return you'd get a highly repairable laptop that you could potentially keep forever.
Score: 19 Votes (Like | Disagree)
Read All Comments