Apple today released an iOS 13.3 beta to developers for testing purposes, and the new update introduces Communication Limits for Screen Time, a feature Apple promised was coming to iOS 13 in a future update. 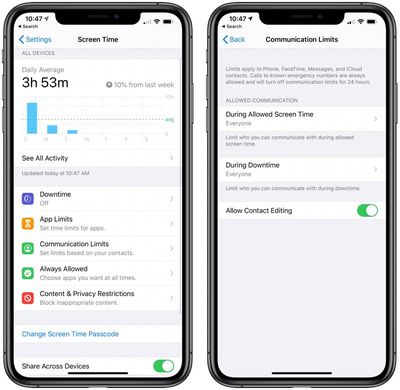 There are settings to control communication during Screen Time, with options to allow just contacts or everyone to be contacted. There's also a toggle that either allows or disallows users to be added to a group chat when a contact or family member is in the group.

There's also a separate setting for communication limits during downtime, which is also able to be set to everyone or just specific contacts.

Finally, there's a toggle for allowing or disallowing contact editing, which can change some of the contact settings.

Regardless of Communication Limits settings, calls to emergency numbers are always allowed and will turn off communication limits for 24 hours when placed.

With the Communication Limits feature, parents will be able to better control who their children are contacting during different periods of the day, cutting off access to friends during school, for example.

There are other smaller tweaks in iOS 13.3, including an option to disable Memoji and Animoji stickers from showing up on the emoji keyboard and a change to the Apple Watch app that shifts the Digital Crown on the icon from black to gray.

Regardless of Communication Limits settings, calls to emergency numbers are always allowed and will turn off communication limits for 24 hours when placed.

Seems like some kids are going to learn this and try calling emergency services now to get around the limits, not realising it’s a bad idea to do that.
Score: 3 Votes (Like | Disagree)

Yes, this is important. I want to be able to limit usage during school hours or homework time. I'm glad Apple is paying attention to Screen Time, and hope they will continue to flesh out the features.
Score: 2 Votes (Like | Disagree)

crawfish963
Unless Snapchat and Instagram are included in this somehow, it's pretty pointless. Those are the two platforms 99% of teenagers are using these days. Snapchat is scary as hell.
Score: 1 Votes (Like | Disagree)

Seems like some kids are going to learn this and try calling emergency services now to get around the limits, not realising it’s a bad idea to do that.

That was my first thought.

My second thought: what if the kid (for example) dials "999" in the US? Would that unlock things, since it's an emergency service number outside the US? I suspect/hope that Apple have it localized (so only "911" would unlock the limits in the US), but for liability reasons, they may have a whitelist of all possible emergency numbers.
Score: 1 Votes (Like | Disagree)
Read All Comments