Apple Music, Beats 1, and the ‌Apple Music‌ Radio feature are down for some users, according to Apple's System Status page.

The outage has been ongoing since 10:30 a.m. Pacific Time, and Apple says that some users may be experiencing issues with "certain features of the music service." 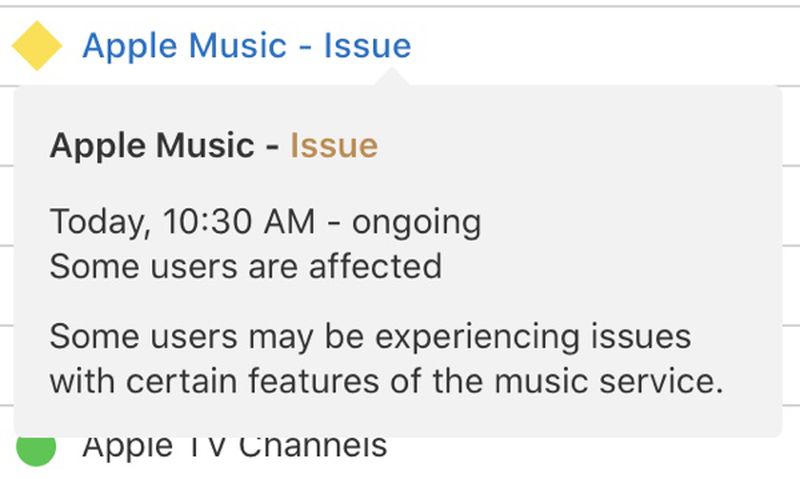 According to multiple reports on Twitter, there are a good number of users who appear to be unable to access the entirety of the ‌Apple Music‌ service at this time.

There's no word on when full ‌Apple Music‌ functionality will be restored, but we'll update this post when the outage ends.

Update: According to Apple, the ‌Apple Music‌ outage has ended.

B4U
One downfall of streaming music versus having the music onboard the device itself.
Rating: 4 Votes

jonnyb098
Akamai is who Apple and others use for content delivery and they are down. Hence the Apple Music, iTunes, App Store outages.
Rating: 3 Votes

now i see it
as I pop another cassette into my Walkman
Rating: 3 Votes

bsbeamer
App Store is down on some devices down as well. Seems to be working fine for iPadOS 13.2, however.
Rating: 2 Votes

!!!
As I was reading this, I got my notification that I was charged for Apple Music.
Rating: 2 Votes

One downfall of streaming music versus having the music onboard the device itself.


…you can download the music for offline playback, though. And even have it downloaded automatically when adding music to your library.
Rating: 2 Votes

anaudiopro
Mac App Store is not working either.
Rating: 1 Votes

TheSkywalker77
My friend mentioned an iOS update taking longer than usual to download as well.
Rating: 1 Votes
[ Read All Comments ]