Prior to delivering the keynote address at the Ceres sustainability gala in New York City this week, Apple CEO Tim Cook spoke briefly with GQ about the company's environmental efforts, iPhone trade-ins, and more. 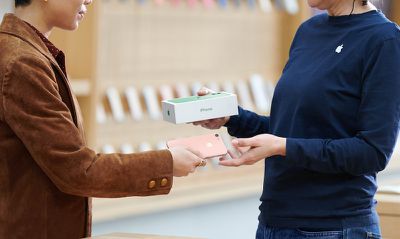 Apple has heavily promoted its iPhone trade-in program at its retail stores and on its website over the last year, and Cook said the increased emphasis has been effective, noting that a third or more of customers that visit its retail stores end up trading in an older device for a newer one.

"This year we've really moved the dial on getting the consumer to think about trade-in," he said. "We were up to a third or more of the people that come into our stores that are trading in, and this number is trending up."

Apple's estimated trade-in values currently range from up to $100 for the iPhone 6s to up to $600 for the iPhone XS Max in the United States, with values varying in other countries. The credit can be applied towards your next Apple Store purchase or paid out in the form of an Apple Store gift card.

When asked whether Apple had a plan to encourage more third-party accessory makers to be more sustainable, Cook suggested that Apple is considering introducing some kind of sticker or label that indicates a particular product meets certain environmental standards, be it an iPhone case or a charging cable.

An eco-friendly badge would likely only apply to Apple-certified accessories that license hardware like the Lightning connector through the MFi Program.

Apple received an award from Ceres this week for its sustainability initiatives, including all of its retail stores, offices, data centers, and other facilities being powered by 100 percent renewable energy since 2018. Apple also has a recycling robot named Daisy that is capable of disassembling 200 iPhones per hour.

Apple has a more ambitious, long-term goal to create a fully closed-loop supply chain, in which it would be able to stop mining raw materials and instead build new products entirely with recycled materials. Cook said he is "not worried" about Apple eventually figuring out ways to achieve that feat.

travis64
1/3 of customers are getting jipped
Score: 36 Votes (Like | Disagree)

turbineseaplane
"Please line up over there under the sign that reads Red Rover, Red Rover - Customer please bend over..."
Score: 19 Votes (Like | Disagree)

archer75
I used the trade in program on my daughters phone. I thought they gave a decent price. And I didn't have to deal with the absolute nightmare of trying to sell it on my own. The scams, the no shows, the idiots who can't read a posting. I don't mind missing out on a few bucks to not have to deal with that.
Score: 15 Votes (Like | Disagree)

Siannath
This benefits to nobody but Apple:
- Customers get from Apple less value compared to selling their used devices.
- Apple reduces the used devices market, which is "dangerous" as erodes value on new devices.
- Apple gets more profit.
Score: 13 Votes (Like | Disagree)

Yeah I traded once for connivance. Never again, what Apple gives you is not even remotely competitive. Another notch on the belt for Apples bulging anti-consumerism.

It may not be ‘competitive’ in terms of the resale market, but I would rather trade into Apple/my carrier versus selling my phone with amount of fraud that’s out there on craigslist, Swappa, eBay, etc. It’s just a ‘safe bet’ for those who are more cautionary, and for some, we don’t need to maximize our profits when trading in the iPhone.
Score: 8 Votes (Like | Disagree)
Read All Comments