Google earlier this month unveiled the Pixelbook Go, a new premium Chromebook that's similar to a MacBook Air or a MacBook Pro, but Chrome OS.

In our latest video, we went hands-on with the Pixelbook Go to see how it measures up to Apple's ‌MacBook Air‌ (the two have similar price points) and whether or not it can serve as a ‌MacBook Air‌ replacement.

Subscribe to the MacRumors YouTube channel for more videos.
Design wise, the Pixelbook Go looks rather similar to a MacBook featuring a lightweight chassis, a large trackpad, a 13-inch display with slim side bezels and a thicker top/bottom bezel, a keyboard with speaker grilles at each side, and a similar hinge mechanism.

A G logo at the top and a wavy, bumpy textured feel at the bottom sets it apart from the ‌MacBook Air‌. Like Apple's MacBooks, the Pixelbook Go offers a simple, clean design. 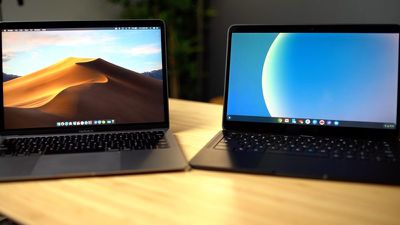 Pricing on the Pixelbook Go starts at $649 for an Core M3 processor and 64GB of storage, but we tested the upgraded Core i5 model with 8GB RAM and 128GB of storage, which is priced at $849. That's the model most similar to the entry-level ‌MacBook Air‌, which comes with a 1.6GHz Core i5 processor, 128GB of storage, and 8GB RAM for $1,100.

The Pixelbook Go is cheaper than the ‌MacBook Air‌, but there are some areas where it is definitely lacking in comparison. When it comes to the display, for example, it's adequate, but the HD quality just doesn't measure up to the ‌MacBook Air‌'s Retina display. There is an upgraded version of the Pixelbook Go with a 4K display, but that machine is priced at $1,400.

One area where the Pixelbook Go shines is its keyboard. The keyboard doesn't look too different from a MacBook keyboard, but it's super quiet thanks to Google's Hush Keys feature, satisfying to type on, and has the perfect amount of key travel. There are also custom keys, including a key for activating Google Assistant. There are speakers located to each side of the keyboard, and the sound quality is solid. The speakers are a touch louder than the ‌MacBook Air‌'s speakers at maximum volume, but the ‌MacBook Air‌ wins out when it comes to sound quality.

There's a MacBook Air-style trackpad on the Pixelbook Go, but MacBook competitors often have a hard time replicating the feel of Apple's trackpad, and the Pixelbook Go is no exception. There's a physical trackpad button that feels clunky and outdated compared to Apple's Haptic Trackpad.

Chrome OS is designed for everyday tasks like browsing the web, creating documents, taking notes, and sending emails rather than more specialized tasks like photo and video editing. Technically, most people who buy something like an entry-level ‌MacBook Air‌ are probably primarily using it for the same purposes, but you do have a bit more flexibility with macOS.

The option to download Android apps has made Chrome OS more useful over the course of the last several years, and there are, for example, apps for photo and video editing, though we wouldn't recommend them for regular full-time usage.

All in all, for most people, the upgrade to the ‌MacBook Air‌ over the Pixelbook Go may be worth the price differential given the better screen quality and the option to use macOS, though it's still much cheaper than the ‌MacBook Air‌ when it comes to the entry-level $649 option. The Pixelbook Go is one of Google's nicest Chromebooks in terms of design, hardware, and the complete Google experience, so it is likely the better choice for those who prefer a Google ecosystem.

What do you think of the Pixelbook Go? Would you use it over a ‌MacBook Air‌? Let us know in the comments.

ctyrider
No, I wouldn't use it over a MacBook Air.. Only because one is a glorified web browser, and another is a .. computer.
Score: 27 Votes (Like | Disagree)

Chrome OS is designed for everyday tasks like browsing the web, creating documents, taking notes, and sending emails rather than more specialized tasks like photo and video editing. Technically, most people who buy something like an entry-level ‌MacBook Air‌ are probably primarily using it for the same purposes,

I wonder what the author has based this assumption on? Certainly here everyone I know who has a MacBook Air (entry) uses it for a huge amount more than basic everyday tasks - from designing new engineering products, to systems development work, to creative marketing design, to creating customer schematics etc etc. Perfectly capable and powerful machine.
Score: 11 Votes (Like | Disagree)

No, I wouldn't use it over a MacBook Air.. Only because one is a glorified web browser, and another is a .. computer.

If you aren't a developer or a gamer or a couple of other very specific vertical users...what exactly do you need a 'computer' for? If you're not ensnarled in the Apple ecosystem, what do you need a MacOS computer for? I write code all day, every day on a MBPro ... but at home, ChromeOS is my jam. My kids use them at their school, my retired parents use theirs...as much as it pains me to say this...they just work. We all have iPhones but move our pictures to Google Photos, I have an AppleTV but occasionally watch Netflix and Hulu on my Chromebook... There just isn't a lot of things that don't run in a browser these days...
Score: 11 Votes (Like | Disagree)

Mike MA
One might call it MacBook Air style, but it surely hasn‘t the style of a MacBook Air.
Score: 9 Votes (Like | Disagree)

realtuner
That's a lot of money for running a browser with a severely limited App ecosystem.

An iPad has more useful Apps for it than Chrome.
Score: 7 Votes (Like | Disagree)