Apple's services business is set to grow by 20 percent next year, boosted by its forthcoming Apple TV+ streaming service, according to the latest predictions by Morgan Stanley analyst Katy Huberty (via CNBC). 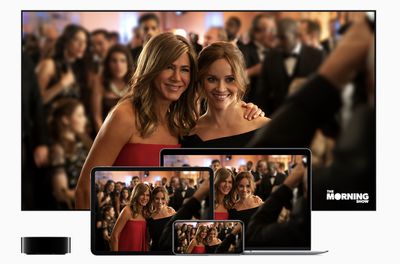 In a new investor note, Huberty predicts that ‌Apple TV+‌ will grow into a $9 billion business by 2025, despite increasing competition in the streaming market and even if only 1 in every 10 Apple user subscribes to the service:

"With an attractive price point at $4.99/month, and wide initial distribution to the Apple installed base via the bundled free year offer, we estimate Apple TV+ can become a $9B revenue business with 136M paid subscribers by FY25, assuming just 1 in every 10 Apple user pays for the Service by FY25."

Huberty also notes that for ‌Apple TV+‌ to have a more material impact on its near term estimates, Morgan Stanley would have to assume: "1) ‌Apple TV+‌ production costs are significantly higher at the launch of the Service, and/or 2) more users redeem the Apple 12 month free offer with the purchase of a device."

Launching on November 1, ‌Apple TV+‌ costs $4.99 per month and will be available on the Apple TV app on iPhone, iPad, ‌Apple TV‌, iPod touch, Mac and other platforms, including online via www.tv.apple.com. Customers who purchase any new ‌iPhone‌, ‌iPad‌, ‌Apple TV‌, Mac or iPod touch starting September 10, 2019, are eligible for one year of ‌Apple TV+‌ for free.

Morgan Stanley also raised its target price for Apple stock from $247 to $289. That works out as a 17 percent increase based on its outlook for ‌Apple TV+‌, as well as its prediction that sales will return "to growth as replacement cycles peak" in 2020 as users upgrade to Apple's 5G-enabled iPhones.

Oraichu
Someone bought apple stocks and hope for a pump lol.
Score: 7 Votes (Like | Disagree)

johnyslats
Now I'm no analyst but 136 million users seems incredibly ambitious given the competitive landscape. Apple Music got to 60 million in 4 years, so more than double this in 5/6 seems a stretch quite frankly
Score: 7 Votes (Like | Disagree)

lkrupp
So like very device or service introduced by Apple the tech blog crowd passes judgement and declares there’s no way for it to succeed... until it does.
Score: 6 Votes (Like | Disagree)

Do we have reviews of their shows yet? My worry is that they're missing out on edgier indie filmmakers that sets the state-of-the-art, in favor of more established filmmakers that may be beyond their prime.

See Fleabag or Pen15 for what I mean.

Apple aren’t into releasing experimental tech. Same philosophy with tv it seems. But it’s early days for the service. And I’m sure Phoebe Wallace Bridger is on their radar now that she’s proven. All in keeping with the tried and tested Apple playbook.
Score: 5 Votes (Like | Disagree)
Read All Comments