Update: As spotted by WCCFTech, Microsoft has now updated all of its Office apps – Word, Excel, PowerPoint, OneNote and Outlook – to support Dark Mode. 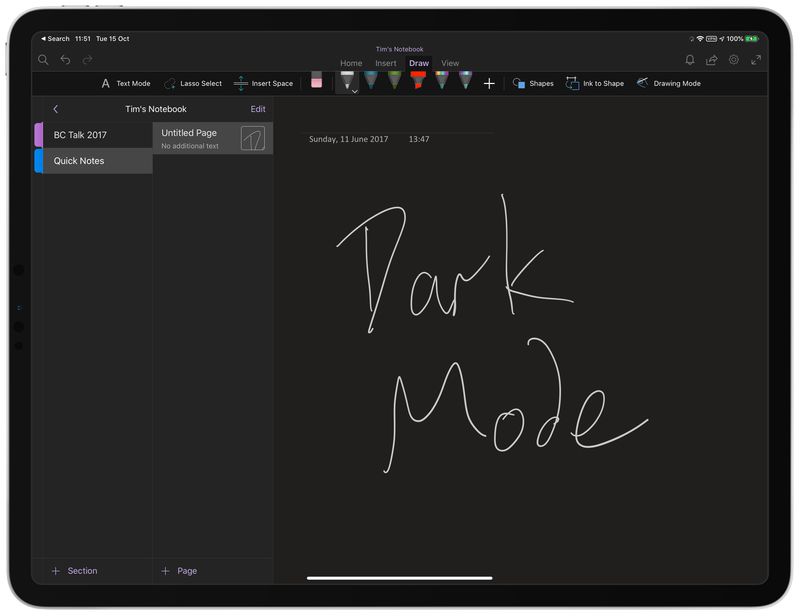 OneNote is usually a particularly bright app because of the large white scrollable canvases and pale menus, so this update should be a welcome one for users who work with it long into the night.

Apart from supporting the new system-wide ‌Dark Mode‌ in iOS 13 and iPadOS, version 16.30 of OneNote makes no other changes to the app, as per the release notes:

Go easy on your eyes with ‌Dark Mode‌: Switch to ‌Dark Mode‌ in low light environments or whenever you want to increase the legibility of the OneNote user interface and the readability of your notes.

Thanks for using OneNote! We listened to your feedback and updated the application with optimizations to help improve your note taking experience.

Microsoft has been adding ‌Dark Mode‌ support to a range of its apps. A Sticky Notes beta gained a dark mode earlier this month, while the rest of the Office iOS apps including Word, PowerPoint, and Excel already sport the twilight look in insider builds and are expected to go live with it any day now.

williamwoneill
I really like this app but I hate it in Dark Mode. The highlighter is garbage in this mode along with the other complaints above. I wish the would give me a way to turn it off for this app. The handwritten preview to this side also sucks. This is a step backwards for an app that I love.
Rating: 1 Votes

BlueCreek
I think these are probably the few apps I wouldn’t use in dark mode, with the exception of outlook. I like to see what my documents would look like on a white background.

I am already having issues copy and pasting out of Notes into third party apps, as it pastes the white font colour onto a white background.
Rating: 1 Votes
[ Read All Comments ]