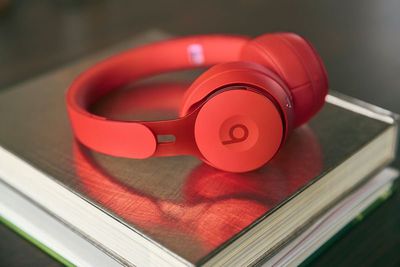 When enabled, a new feature called Transparency turns on the external microphones on the Solo Pro so the wearer can hear announcements, talk with friends, stay aware of their surroundings, and so forth without pausing music playback. There is a button on the left ear cup to switch between the modes.

Battery life is listed as up to 22 hours with Pure ANC and Transparency, and up to 40 hours with those features disabled. Like other recent Beats headphones, a Fast Fuel feature provides three hours of playback with a 10-minute charge.


Beats Solo Pro feature redesigned on-ear cushions with a remodeled enclosure for improved comfort and acoustics. Beats says exposed metal sliders enable a more durable and personalized fit, while the headband has no visible separation at the hinges when unfolded for a sleek appearance.

Additional features include the ability to unfold the headphones to power them on, and Audio Sharing with iOS 13 devices.

Audio Sharing lets you wirelessly share audio between the Solo Pro and other Beats and AirPods with H1 or W1 chips. Simply bring the second set of headphones near an iPhone or iPad running iOS 13 or later and connect with a tap, and then both headphones can listen to the same audio with separate volume control.

Beats Solo Pro headphones will be available October 30 in Black, Ivory, Gray, Dark Blue, Light Blue, and Red, with pre-orders beginning today on Apple.com in the United States. Pricing is set at $299.95.

Included in the box is a Lightning to USB-A charging cable and a carrying case.

BrettArchibald
The link indicates that these are *ON*-ear headphones, not *OVER*-ear headphones, as the MR article states.
Not being picky, but this is a big difference to potential purchasers.
Score: 26 Votes (Like | Disagree)

markfc
Not sure the 'Pro' is needed for a pair of headphone unless their studio reference quality...
Score: 22 Votes (Like | Disagree)

That is a huge difference. I find on-ear headphones to be horribly uncomfortable while liking over-ear headphones like the Beats Studio ones. I thought that the article was wrong on that and was about to check.
Score: 10 Votes (Like | Disagree)

fmcshan
I’m am just going to sit over here and wait patiently for those new AirPods Pro with anc....
Score: 7 Votes (Like | Disagree)

Micro USB, no thanks

They're Lightning and you're welcome.
Score: 5 Votes (Like | Disagree)

On-ear headphones: All the size and inconvenience of over-ear headphones, with none of the sound quality or comfort!
Score: 5 Votes (Like | Disagree)
Read All Comments