Apple has added the Xbox Wireless Controller to Apple.com, although the accessory is currently unavailable to purchase at the time of writing. Apple sells a few different gaming controllers on its website to connect to iOS, iPadOS, and tvOS devices, but as of yet the company has never directly sold Microsoft or Sony's own gaming controllers. 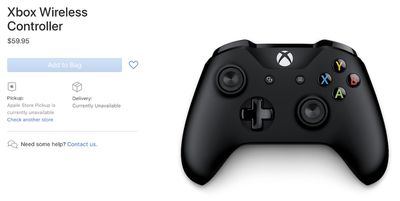 Now that players can connect the Xbox Wireless Controller to their iPhone, iPad, or Apple TV to play games on Apple devices, it appears that Apple has worked out a deal with Microsoft to sell its controller on the Apple store. As of now, Sony's DualShock 4 has not appeared on Apple.com.

It’s not just a controller. It’s your enemy-slaying sword, your pitcher’s golden arm, your salvation from lava. Play Apple Arcade games with your favorite controller. Here’s how to pair an Xbox Wireless Controller with your Apple TV, iPad, or iPhone: https://t.co/RkPSovE7uq pic.twitter.com/LvDNOeaxNX — Apple Support (@AppleSupport) October 5, 2019

Thanks to apps like Sony's PS4 Remote Play, even more gaming options have opened up for ‌iPhone‌ users, who can use the app to remotely control and play compatible games from their PS4 on their ‌iPhone‌ or ‌iPad‌. Microsoft is planning to launch a streaming app of its own to allow mobile users to connect to their Xbox One consoles.

As a note, these controllers are typically cheaper than the traditional $60 price tags. Right now, you can get the Xbox Wireless Controller for $43.99 at Best Buy or $49.99 at Target.

even xbox controller gets the apple tax? i got mine for like 30 bucks on black friday at bestbuy

Well considering it's not black friday...
Score: 30 Votes (Like | Disagree)

even xbox controller gets the apple tax? i got mine for like 30 bucks on black friday at bestbuy

But it’s not Black Friday.
Score: 10 Votes (Like | Disagree)

tobefirst ⚽️
Is this the first hardware product from Microsoft to be sold at an Apple store?
Score: 8 Votes (Like | Disagree)

adamski23
Microsoft controllers are really ergonomic - perfect for binge sessions. Ive always preferred PlayStation console but Xbox controller is hands down better as it does not fatigue my hands.
Score: 6 Votes (Like | Disagree)
Read All Comments