Apple will sell around 10 percent more iPhones in the first quarter of 2020, thanks to strong replacement demand for its iPhone 11 series devices and next year's launch of the "iPhone SE 2," claims Apple analyst Ming-Chi Kuo in his latest research note, seen by MacRumors. 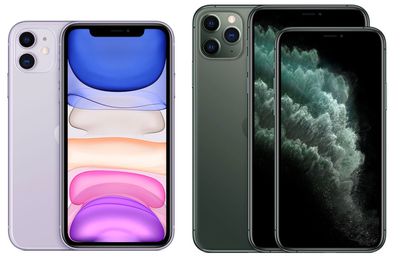 The TFI Securities analyst estimates that ‌iPhone‌ 11 series shipments will reach between 70 and 75 million units in 2019, and he believes that figure may have been higher but for supply constraints. A Nikkei report previously claimed Apple has upped orders from suppliers after stronger-than-expected demand for its latest flagship phones.

If those figures are accurate, Kuo says Pro series shipments will be lower than last year's equivalent ‌iPhone‌ XS shipments, but only because of a tighter supply caused by "increased production difficulties" of specific ‌iPhone‌ 11 Pro components. Meanwhile, shipments of ‌iPhone‌ 11 will be higher than 2018's ‌iPhone‌ XR, mainly because the ‌iPhone‌ XR didn't start shipping until the middle of the fourth quarter.

Kuo says Apple has increased some suppliers' shipment forecasts or capacity requirements in the fourth quarter to ensure that shipments going into next year meet demand. Boosted by more affordable prices, the high replacement demand for the ‌iPhone‌ 11 could run into the first quarter of 2020, the analyst believes. As a result, Kuo estimates that "‌iPhone‌ 11 shipments in 1Q20 (22–24mn units) will be better than those of ‌iPhone‌ XR in 1Q19 (14mn units) significantly."

Kuo has previously claimed that Apple plans to release a lower-priced "‌iPhone SE‌ 2" in the first quarter of 2020. Earlier this month, he said the device will feature a similar form factor design and specifications as the ‌iPhone‌ 8, with a faster A13 chip and 3GB of RAM.

This again could prove the naysayers wrong.
Score: 30 Votes (Like | Disagree)

99% or more of people who “care about 5G” and bitched about it here were never even interested in buying an iPhone.

99.9% of people talking about 5G are positioning it as a “must have” feature simply so they can criticize the iPhone for not having it, even though it will bring no noticeable benefits to their phone.
Score: 15 Votes (Like | Disagree)

Mr. Dee
Proves how much no one really cares about 5G. Happy with my X, can’t justify the upgrade yet.
Score: 13 Votes (Like | Disagree)

Proves how much no one really cares about 5G. Happy with my X, can’t justify the upgrade yet.

99% or more of people who “care about 5G” and bitched about it here were never even interested in buying an iPhone.
Score: 10 Votes (Like | Disagree)

In it, it "appears" he is describing manufacturing shipments, NOT projected "unit sales".

Apple needs to get as many iPhones as possible into its Sales Channel here in the States BEFORE Dec 15th, to circumvent the 15% iPhone Tariff, which incidentally, Kuo does NOT even mention !

I think you’ve posted this enough.

I’m betting that a true successor to the iPhone SE will never happen and the compact 4” screen size is dead.

All these “SE 2” rumours are click-bait and Apple instead is simply going to refresh the iPhone 8.

I wish they didn't refer to it as the SE2.

Thursday December 1, 2022 4:37 pm PST by Juli Clover
With the launch of iOS 16.1, Apple rolled out a Emergency SOS via Satellite, which is designed to allow iPhone 14 owners to contact emergency services using satellite connectivity when no cellular or WiFi connection is available. The feature was put to the test in Alaska today, when a man became stranded in a rural area. In the early hours of the morning on December 1, Alaska State Troopers ...
Read Full Article • 211 comments