Apple plans to make an impact in Hollywood by premiering feature-length movies to theaters before releasing them on its upcoming Apple TV+ streaming service. 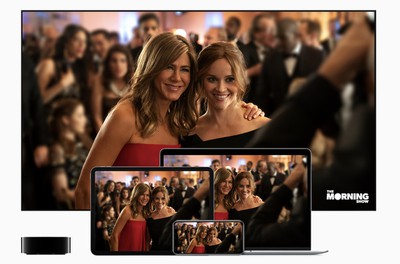 According to The Wall Street Journal, Apple has "made overtures to cinema chains and consulted with an entertainment executive" as it considers following a traditional theatrical release plan.

If Apple follows through with the plan of observing a significant period of theatrical exclusivity, it would be adopting a longstanding business model in the commercial cinema industry that's also a proven route to awards eligibility, since film awards typically require a theatrical run for their candidates.

Theater chains want to attract audiences for as long as possible before they have the option to stream movies at home, with some requiring a 90-day period of exclusivity before movies go to home streaming services.

Netflix often releases its films in theaters before streaming them. However, adopting the plan could be perceived as risky for a new venture like ‌Apple TV+‌, as Apple will likely want to use new content to attract and retain subscribers to its $4.99 per month streaming platform, due to arrive on iOS, Mac, and Apple TV in November.

Spizike9
I like going to the movie, but mostly just because of my kids. However with the cost of going to the movie as a family I think I’d rather just wait a few weeks till the movie came out on Apple TV+. The money I save would pay for an entire year of the service.
Score: 9 Votes (Like | Disagree)

seadragon
I haven't been to a movie theater in probably 20 years. LOL.
Score: 4 Votes (Like | Disagree)

DoctorTech
I rarely go to the movies but I like the option for "big movies" such as Lord of the Rings or Star Wars. It is nice to get away from distractions and interruptions for 2 hours and just concentrate on the big screen. However this is definitely the exception instead of the rule. The vast majority of movies I watch are through Apple TV / Netflix.

Regarding Apple debuting their movies at the theater, I think it makes sense for them to do so since it will make their content eligible for Oscars.
Score: 4 Votes (Like | Disagree)

I haven't been to a movie theater in probably 20 years. LOL.

randyj
I wish Apple would set up a separate company for this stuff.
Apple studios or whatever.

Apple doesn’t make music for their streaming service.
So why do they need to make movies and TV shows for Apple TV+?

I think it is an unnecessary distraction from their core business.
Better effort would be to license the best shows from ever other provider and package that together as 1 offering.
Score: 3 Votes (Like | Disagree)

I haven't been to a movie theater in probably 20 years. LOL.

Too many idiots ruining what is now, quite an expensive experience. Phone screens dazzling, chatting away. Why pay lots of money to be irritated? I miss the impact of seeing movies on the big screen, that's why the first chance I get, I'll have a dedicated cinema room in my house.
Score: 3 Votes (Like | Disagree)
Read All Comments

Tuesday May 11, 2021 11:56 am PDT by Joe Rossignol
Last month, Apple introduced a new iPad Pro with the same M1 chip found in the latest Macs, and early benchmark results indicate that the M1 iPad Pro is over 50% faster than the previous-generation iPad Pro. Based on five legitimate Geekbench 5 results (here's the fifth) for the fifth-generation 12.9-inch iPad Pro with the M1 chip, the device has average single-core and multi-core scores of...
Read Full Article • 343 comments