ChargerLAB has tested wireless charging speeds on iPhone 11 models running iOS 13.1 and found that multiple wireless charging pads that were able to charge the new iPhones at 7.5W on iOS 13 are now limited to 5W. 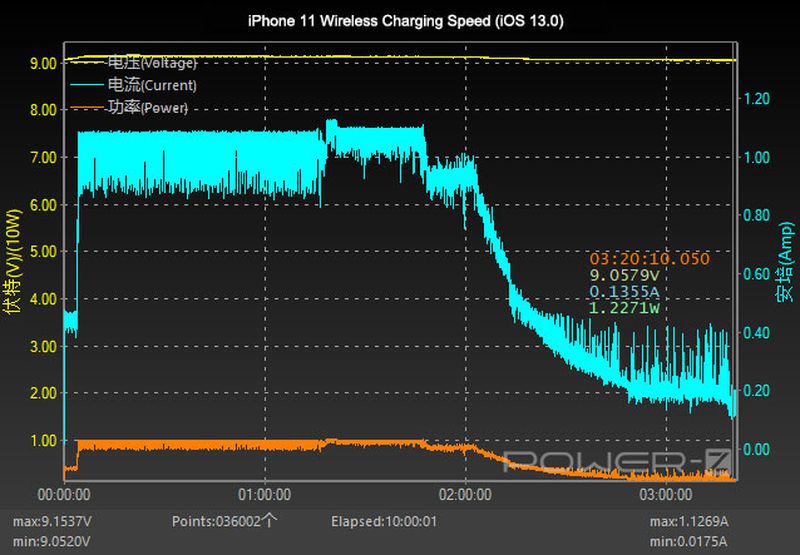 Unsurprisingly, the decreased power lengthens charging times, as visualized in ChargerLAB's graph below:

The report claims that exceptions include various wireless charging pads from Belkin, Mophie, Native Union, Anker, and Logitech sold by Apple Stores, leading ChargerLAB to speculate that Apple may be limiting 7.5W wireless charging to pads using fixed-frequency voltage regulation as of iOS 13.1.

Apple refers to fixed-frequency 7.5W charging as "Apple Fast Charging" in some product listings on its website, but the technology was incorporated into the Qi standard last year, so it is no longer proprietary and seemingly should not require certification under Apple's MFi Program to incorporate.

We've reached out to Apple for comment and will update this story if we receive any new information.

Bangarang143
Either way - slow AF. If I want to charge fast, I plug into a real charger. Wireless charging, for me, is more for convenience when charging overnight or sitting on my desk at work. Don't really care if it's slow
Score: 20 Votes (Like | Disagree)

topgunn
Too much heat for me. I'll stick to cables.
Score: 11 Votes (Like | Disagree)

dannyyankou
They have the nerve to call 7.5w as “Apple Fast Charging” when there are android phones that wirelessly charge at 10W, lol
Score: 9 Votes (Like | Disagree)

macfacts
So apple is forcing people to buy authorized apple chargers to get fast charging?
Score: 7 Votes (Like | Disagree)

Please bring back the thumbs down.
Score: 6 Votes (Like | Disagree)
Read All Comments

Wednesday April 1, 2020 2:45 pm PDT by Juli Clover
Apple in March updated both the MacBook Air and the iPad Pro, and with the iPad Pro increasingly positioned as a computer replacement, we thought we'd compare both new machines to see how they measure up and which one might be a better buy depending on user needs. Subscribe to the MacRumors YouTube channel for more videos. We're comparing the base model 12.9-inch iPad Pro and the base model...
Read Full Article • 53 comments