In the iOS 13.1 update released this morning, Apple tweaked the designs of several emojis, updating inaccuracies in some cases and changing colors and designs for other emoji.

According to Emojipedia, Apple updated a total of 24 emoji designs in iOS 13.1, and several of the most important updates relate to tweaks to animals. 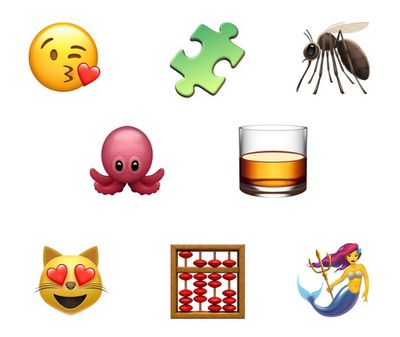 The octopus, for example, now has suckers on its tentacles, which were missing before, and the squid emoji no longer has a siphon in the middle of its face, which was anatomically incorrect.

The mosquito now has six legs instead of five legs as in the prior emoji, and the abacus now has its beads oriented vertically instead of horizontally, which is more historically accurate.

Apple changed the jigsaw puzzle piece from blue to green, and changed the hearts used for emojis like face with heart eyes. The mermaid emojis now feature the mermaid holding a trident, the cow is a slightly different color, shading on the mouse has been updated, and a few other emoji have also received smaller design tweaks.

New faces, gestures, and poses coming include yawning face, pinching hand, person kneeling, person standing, and new people holding hands options that are both gender and skin tone inclusive, plus there are a wide selection of other miscellaneous emoji.

Apple earlier this year previewed all of the upcoming emoji characters, and they'll be added to iOS in an update to iOS 13 set to be released later this year. It's not entirely clear when we might see the new characters, but last year Apple released updated emoji in early October.

alexandr
now this is important! who cares if my mail notifications still don't work!
Score: 51 Votes (Like | Disagree)

Baymowe335
Again guys, this has nothing to do with the team that handles bugs.

Scottsoapbox
You know the best part about the original yellow "smileys" that later became emoji?

You didn't have to worry about being inclusive or offensive... because they were just abstract universal facial expressions.
Score: 23 Votes (Like | Disagree)

Act3
does anyone really give a ? about emojis?
Score: 19 Votes (Like | Disagree)

I want the bugs fixed not freaking emojis! Terrible...

You don't want the bugs fixed by emoji artists.
Score: 16 Votes (Like | Disagree)