Apple says that its new iPhone 11, ‌iPhone 11‌ Pro, and iPhone 11 Pro Max are made from a more durable glass that's the "toughest glass ever in a smartphone," and warranty company SquareTrade conducted one of its annual drop tests to put Apple's claims to the test.

According to SquareTrade's Breakability Score tests, the new ‌iPhone 11‌ and 11 Pro models had more durable glass and better handled small drops, but were still prone to shattering in major drops.


In a series of 6 foot drop tests conducted both face up and face down, all three of the iPhones broke and suffered damage of varying degrees. In a tumble test, though, where the iPhones are tumbled around in a metal cylinder, the new devices fared a bit better. 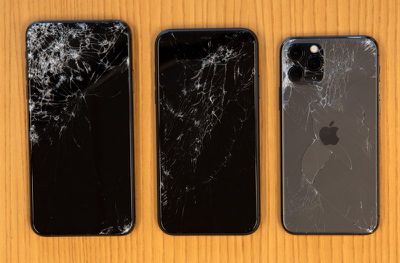 "After our robots dropped, dunked, tumbled and bent the devices, we found the new iPhone 11 Pro to be the most durable iPhone we've tested in generations," said Jason Siciliano, vice president and global creative director at SquareTrade. "It's the first smartphone to survive our tumble test, which simulates the effects of multiple, random impacts experienced by a smartphone during long-term use. That's a real achievement when it comes to durability. However, dropping any of the new iPhone 11 models on a sidewalk without a case, face-down or back-down, can still cause serious damage, as we saw with our drop tests."

Several other less formal drop tests have been conducted on the new ‌iPhone 11‌ models since launch, with mixed results.

At three feet, six feet, and eight feet, the iPhones stayed undamaged for the most part, though some suffered minor scratching and pixel damage on the display. At 11 feet, the ‌iPhone 11‌'s camera quit working, but the 11 Pro and Pro Max didn't break.


YouTuber EverythingApplePro saw results that were quite similar to CNET's in drop tests from multiple heights and at different angles onto concrete. None of the iPhones broke from waist or head height, and the ‌iPhone 11‌ only shattered after being dropped 10 feet.
What happens to one of the new ‌iPhone 11‌ models when dropped in the real world is going to depend on the drop height, the material it's dropped on, where the ‌iPhone‌ takes the blow, and other factors, so these tests aren't necessarily demonstrative of what's going to occur when you drop your ‌iPhone‌.

Testing overall suggests the new 2019 iPhones are more durable than previous-generation iPhones, but glass plus a hard surface still has the potential to result in damage, so it's best to use a case.

Pavement to a smartphone is like Kryptonite to Superman. If you value your high priced purchase and don't want it to shatter, put a tempered glass screen protector on the from and put the phone in a quality rubberized case. And yet there are some already bitching in the iPhone forums asking why the front face is already scratched on their brand new iPhone 11 because all they did was put the phone in the same pocket with their car keys.

Sometimes you just can't make this stuff up. :rolleyes:
Score: 23 Votes (Like | Disagree)

bandrews
Hate to come across overly pious but these drop tests are so depressingly wasteful. Everyone knows phones break if you drop them. These tests aren't for information, they're for entertainment - just to get the likes and follows and money from whichever platform they get posted too.
Score: 15 Votes (Like | Disagree)

Scottsoapbox
But but Apple shot broccoli at it without damage!
:eek:
Score: 13 Votes (Like | Disagree)

Mr. Dee
Like seriously, what’s the point of these tests? It’s glass, it’s gonna break! I’m not saying you should baby the thing, but put a case on it and just be a little conscious of where you put it. Going two years with my iPhone X and not a single scratch or drop. I guess this is for the clumsy.
Score: 12 Votes (Like | Disagree)

Sunday January 23, 2022 10:32 am PST by Juli Clover
Apple is working on a number of new products that are set to launch this fall, and Bloomberg's Mark Gurman says that it will be "the widest array" of new devices that Apple has introduced in its history. In his latest "Power On" newsletter, Gurman explains that Apple is working on four new flagship iPhones (iPhone 14, iPhone 14 Max, iPhone 14 Pro, and iPhone 14 Pro Max), an updated low-end Ma...
Read Full Article • 234 comments