Following new iPhone releases, the devices are always subjected to a range of durability tests, and the iPhone XS and XS Max are no exception. Over the weekend, warranty company SquareTrade conducted several tests on the two new smartphones, checking Apple's claims of IP68 water resistance and more durable glass.

According to Apple, the iPhone XS and XS Max are using "the most durable glass ever in a smartphone" and have improved IP68 water resistance, meaning they can withstand water up to two meters deep for approximately 30 minutes.


In SquareTrade's tests, the two iPhones stood up well to liquids, but the more durable glass didn't prevent them from shattering when dropped.

It only took a single back down drop test from a six foot range onto a hard surface for the iPhone XS to shatter entirely, resulting in broken, loose glass across the back of the device. Like the iPhone X, the iPhone XS and XS Max feature glass on the front and back to enable wireless charging.

The result was the same for the iPhone XS Max, with back glass of the smartphone shattering after being dropped from a six-foot height. The stainless steel frames Apple uses for the iPhone XS and XS Max protected the two devices during a side drop test, but the face down drop test also resulted in breakage.

When dropped face down, the iPhone XS suffered a shattered and malfunctioning display, while the iPhone XS Max was impacted with hairline cracks and loose glass but still had a usable display.

After a 60 second tumble test, both the iPhone XS and the iPhone XS Max were covered in hairline cracks, scratches, and featured loose glass after the damage, and in a pressure-based bend test, the iPhone XS cracked at 250 pounds and the screen failed entirely.

SquareTrade also tested the water resistance of the iPhone XS and the iPhone XS Max in a novel way, using a 5-foot 30 minute dunk test in a tank filled with 138 cans of beer. Beer was the liquid of choice for the test because Apple mentioned beer resistance during the keynote when the two devices were announced. 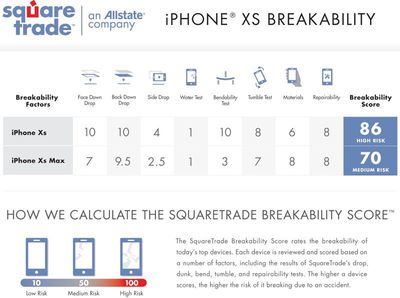 All in all, SquareTrade believes the iPhone XS and XS Max are stronger than the iPhone X, but are still prone to breaking easily given that both devices shattered on the first drop during the drop test.

"We were super impressed with the iPhone XS Max, which is much stronger than its discontinued predecessor, the iPhone X. However, as with the iPhone X, our tests show the all-glass design of the iPhone XS and XS Max make them highly susceptible to cracking, particularly from drops, the most common cause of damage, said Jason Siciliano, vice president global creative director at SquareTrade.

"Repair costs for the new iPhones are expected to be around $399 to replace a front screen and $599 to replace a shattered back. Considering $599 was the cost of the most expensive version of the very first iPhone, repair costs are now something to consider when buying a new iPhone. They're beautiful phones. Just hang on tight."

As with the iPhone X, non-warranty repairs for Apple's all-glass devices are expensive. Without AppleCare+, getting the screen replaced on the iPhone XS costs $279, while a screen repair for the iPhone XS Max costs $329.

PickUrPoison
I think six feet is an odd height to use for testing a phone drop. Very few people hold their phones over their head before they drop them.
Score: 27 Votes (Like | Disagree)

I often wonder, at what sort of salary range are Apple targeting for iPhone Xs?
Score: 21 Votes (Like | Disagree)

FilipeTeixeira
I don't get it. A company which sells insurance for iPhones and so on, "tested" a device to prove that it breaks easily, meaning that probably you should insure it?
Isn't this a bit like when tobacco companies used to claim that smoking was good for your health, or am I missing something here?
Score: 19 Votes (Like | Disagree)

northernmunky
I've owned 7 iPhones to date and never so much as scratched a single one. All were resold in pristine condition.
.
.
.
I've probably jinxed myself now.
Score: 10 Votes (Like | Disagree)

Which is why I always buy AppleCare+

I never did and never needed it so far...
I saved so much money by NOT buying AppleCare, that i can easily pay the full price if any device should ever need repairing. ;)
Score: 10 Votes (Like | Disagree)

A sucker is born every second...

They said 'the most durable' not the 'most durable unbreakable glass'.
Score: 9 Votes (Like | Disagree)
Read All Comments

Sunday June 26, 2022 7:36 am PDT by Joe Rossignol
iPhone 14 Pro models are widely expected to feature always-on displays that allow users to view glanceable information without having to tap to wake the screen. In the latest edition of his Power On newsletter for Bloomberg, Mark Gurman said the feature will include support for iOS 16's new Lock screen widgets for weather, fitness, and more. "Like the Apple Watch, the iPhone 14 Pro will be...
Read Full Article • 101 comments