Customers Waiting in Line at Apple Retail Stores Around the World for iPhone 11, 11 Pro, and 11 Pro Max

Thursday September 19, 2019 2:37 pm PDT by Juli Clover
The iPhone 11, 11 Pro, and 11 Pro Max will soon be available in Australia and New Zealand before rolling out to other countries around the world, and customers have already started lining up to purchase one of Apple's new devices.

At the Orchard Road store in Singapore, where the ‌iPhone 11‌ and 11 Pro will roll out in just a few hours, hundreds of people are waiting. 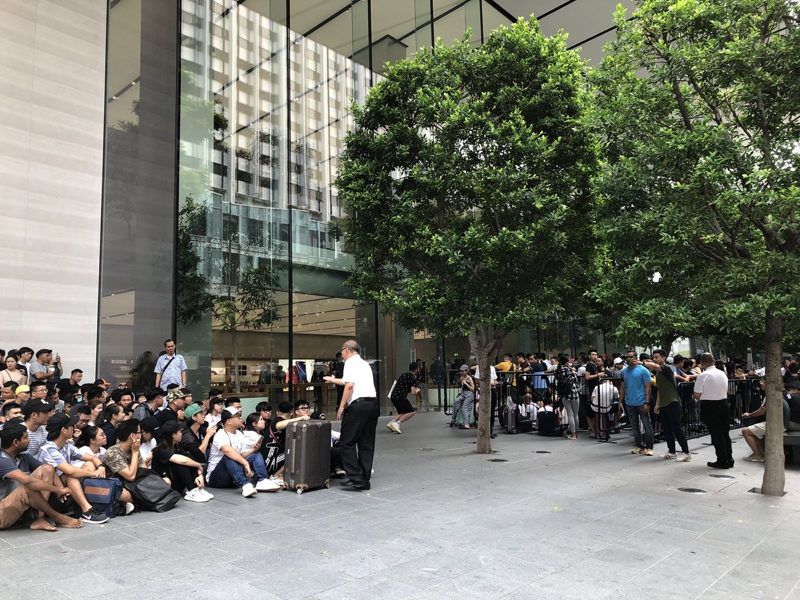 There's a similar scene at Apple's Ginza and Marunouchi stores in Japan, where some customers have started waiting for the new iPhones.


Customers still have several hours to wait in Europe, but lines have started at Apple's flagship Kärntner Straße store in Vienna, Austria.


Most U.S. stores don't appear to have long lines just yet, but people will likely start showing up at retail locations as the launch date draws nearer.

Apple's iPhone 11 Pro and Pro Max models sold out rather quickly after pre-orders became available on September 13, so there may be a decent number of people hoping to get a new ‌iPhone‌ in store.

Orders placed for new ‌iPhone 11 Pro‌ and Pro Max models today won't be shipping out until October, which will increase demand for in store models.

Customers in the United States who did not pre-order and who are hoping for a launch day device should get to an Apple retail store or carrier store as early as possible.

Are you planning to wait in line for an Apple device this year? Let us know in the comments.

now i see it
I'm going to wait in line but not buy anything. It's all about the journey, not the destination
Rating: 22 Votes

I had a Chick-Fil-A open up near me recently. First 100 people get free meals for a year. More than 12 hours out from their grand opening, there was a line over 200 people long.

They like it, so they planned for it. If I had kept track on of when it was going to open I wouldve taken time off work to go wait in line.

That would be the exact definition of too much free time.
Rating: 16 Votes

That would be the exact definition of too much free time.

Too much free time

Or it's something these people are passionate about.

I had a Chick-Fil-A open up near me recently. First 100 people get free meals for a year. More than 12 hours out from their grand opening, there was a line over 200 people long.

They like it, so they planned for it. If I had kept track on of when it was going to open I wouldve taken time off work to go wait in line.
Rating: 14 Votes

So why the hell are people doing this?

waiting in line for days just makes absolutely no sense.

Congrats on wasting around 1-2 days for your new phone, which everybody else got at the same time as you.


They’re enthusiasts with something in common enjoying something unique together. That’s not too hard to understand if you care to. I remember playing hooky from school and waiting in line around the block all day when Return of the Jedi came out. The waiting in line and the anticipation of the payoff was half the fun. This is no different. Only the most jaded can’t see that camping out with buddies and striking up chats with like-minded folk is a good time and a future memory, regardless of what you’re waiting for. “It’s not logical so therefore it’s deplorable.” Are you all Vulcans?? Have you never once done something a little crazy just for the heck of it? No? How sad.
Rating: 10 Votes

mrcrlee
It’s amazing how Apple has me hooked. I’m not upgrading from my xs Max this year (just couldn’t rationalize the upgrade) but I really want to buy one just to be a part of the excitement and fun. Love those release day UPS refreshes and tracking it from China. Argh! :):)
Rating: 9 Votes

hlfway2anywhere
I’ll be receiving mine in the comfort of my home tomorrow thx.
Rating: 8 Votes

metalsiren
For some people they like the experience, I used to do this as well back in the day. Got to meet and talk to different people etc. I kind of miss it at times but I am getting to old for that **** now
Rating: 6 Votes

njohnson232
OR OR OR, if you dont want to wait... you could just order one from Best Buy for store pickup tomorrow. They still have pre-orders for launch day.
Rating: 6 Votes