One of the new features of the iPhone 11 and iPhone 11 Pro models is an upgraded 12-megapixel front-facing TrueDepth camera system, which, for the first time, is able to take slow motion 120fps videos.

When introducing the 2019 iPhones, Apple invented a new word for the function, combining slo-mo (the name long used for the 120fps feature on the rear-facing camera) and selfie into the word "Slofie." 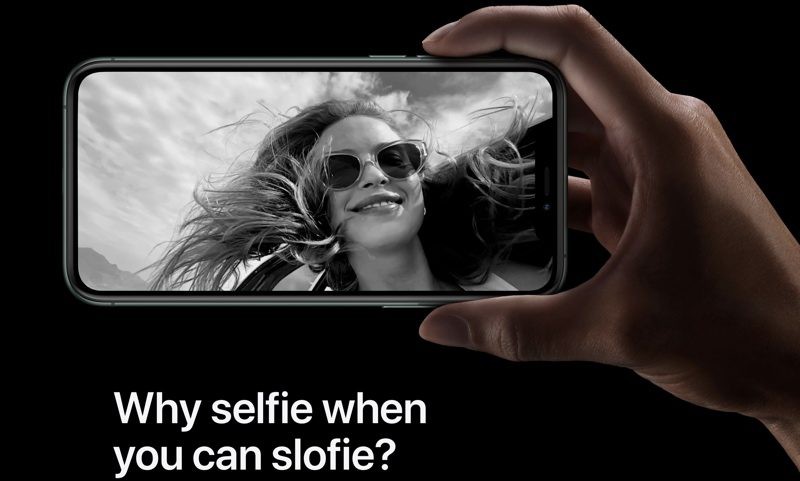 Slofies didn't sound like a serious word when Apple first mentioned the feature at the iPhone event, but the company is promoting Slofies in multiple places on its website, and as The Verge points out, Apple last Friday filed a trademark on "Slofie" in the United States.

Slow motion videos taken with the front-facing camera are identical to the slow motion videos that have previously been available through the rear-facing camera, slowing down motion for a unique super slow effect. "Slofie" isn't used to describe the feature in the camera app, where it's just referred to as "Slo-mo."

It's not clear if Slofies are going to take off and become a popular feature, but Apple is certainly aiming to make that happen. Prior to when Apple used the word on stage on September 10, the Slofie term doesn't appear to have been widely used, so it's likely Apple will be granted the trademark.

Apple's move to trademark the term will prevent other smartphone makers from marketing their devices with a similar feature name, ensuring the "Slofie" term is associated exclusively with iPhones.

Digital Dude
I'll use the feature as about as often as I use my MBP touchless bar
Score: 4 Votes (Like | Disagree)

the Slofie term doesn't appear to have been widely used

its93rc
This name is cringe. It sounds worse than 'selfie'.
Score: 3 Votes (Like | Disagree)

You guys are more cringey than the Apple you try to roast.

Nobody needs to try this time, except you.
Score: 2 Votes (Like | Disagree)

redheeler
Apple can have slofie. I seriously doubt it'll catch on, the novelty of this feature will wear off quickly.
Score: 2 Votes (Like | Disagree)
Read All Comments

Thursday May 28, 2020 8:13 am PDT by Eric Slivka
With the release of macOS Catalina 10.15.5 and related security updates for macOS Mojave and High Sierra earlier this week, Apple is making it more difficult for users to ignore available software updates and remain on their current operating system versions. Included in the release notes for macOS Catalina 10.15.5 is the following:- Major new releases of macOS are no longer hidden when...
Read Full Article • 308 comments

Friday May 29, 2020 10:00 am PDT by Eric Slivka
Following a couple of leaks in recent weeks, Beats today is officially announcing four new colors for its Powerbeats Pro wireless earphones: Spring Yellow, Cloud Pink, Lava Red, and Glacier Blue. The new earphones will go on sale June 9 and sell for the same $249.95 price as the existing color options. Aside from the colors, the new Powerbeats Pro models are otherwise identical to the...
Read Full Article • 44 comments