Apple hasn't updated its own order system and many orders will say "Preparing to Ship" until later in the week, but customers in the United States who are receiving their devices via UPS can use the UPS My Choice feature for tracking purposes or track via reference number, such as an order number or a phone number. 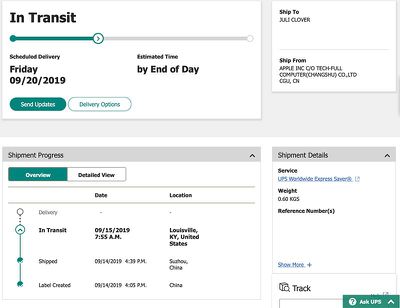 Signing up for UPS My Choice is free and well worth it for those who want to keep an eye on their upcoming shipments.

If you've ordered a new device, shipment details should already be available, with iPhones and Apple Watches shipping from China and arriving in the United States.

Many iPhones and Apple Watch models have just recently shipped from China so there aren't a lot of tracking details available. In some cases, the date of arrival is listed as tentative, but in our experience, these tentative dates firm up later in the week and those who pre-ordered early can count on a September 20 arrival date.

Some ‌iPhone 11‌ Pro and Pro Max models, especially in the Midnight Green color, sold out quick and even those who pre-ordered early weren't able to get launch day arrival. Apple often ends up managing to ship devices earlier than promised, so those expecting October arrivals could get their iPhones earlier.

The ‌iPhone 11‌, 11 Pro, and 11 Pro Max will be officially available on September 20, and those who weren't able to get one may be able to pick up a new iPhone in store on that date.

I asked apple to change my shipping address twice, and did they do it...... nope. Thanks for nothing Apple

coolfactor
There needs to be a way to capture the excitement and channel that into some kind of world power source.
Score: 23 Votes (Like | Disagree)

Omg! Fed-Ex just showed up at work with 11 pro midnight. Beautiful!! What a nice surprise on a Monday!! 

Omg! Fed-Ex just showed up at work with 11 pro midnight. Beautiful!! What a nice surprise on a Monday!! 

It’s funny how your warehouse shadow matches Apples promotional photos. What a coincidence!

Exciting for some. I'm just bummed that something changed in how  sends them out last year in that instead of delivery/release date arrival, Alaska (or at least me) customers get them about 5 days later. Both years ordered in first minute of availability...the free shipping now to AK delays arrival (25th estimate arrival). First world problems I know, but I'd pay extra if they let me to get them on release date.

hazeydavey
Every year I say I ain't going to do it....every year I come here to watch the posts of people posting their tracking and following the UPS flights.....and I follow it too. Like watching the Santa tracker!
Score: 6 Votes (Like | Disagree)
Read All Comments