Apple Watch Series 5 Models Offer 32GB of Storage, Up From 16GB in Series 4

The new Apple Watch Series 5 models, which Apple unveiled today, feature 32GB of internal storage for music, photos, apps, and other content, according to Apple's specifications for the new device.

At 32GB of storage for both GPS and Cellular models, the Apple Watch Series 5 offers double the storage of the previous Series 4 models. Apple may have increased the storage in the new device due to the ‌Apple Watch‌ App Store that's available in watchOS 6, set to be released on September 19. 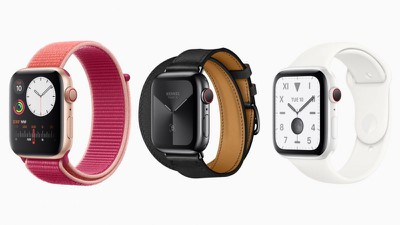 Along with additional storage, the ‌Apple Watch‌ Series 5 offers an always-on Retina display for the first time, which allows the watch face to be activated permanently. There's also an international emergency calling feature that contacts emergency services when you activate SOS regardless of which country you're in.

It also includes a built-in compass feature and Compass app for keeping track of your orientation, along with an S5 processor. The Series 5 comes in aluminum, stainless steel, and in new titanium and ceramic finishes.

For the first time since the ‌Apple Watch‌ launched, Apple is allowing customers to choose any available band to go with the case of their choice using the new ‌Apple Watch‌ Studio.

i'm.huMAC
That awkward moment when Apple Watch has as much storage as the latest base iPad...
Score: 34 Votes (Like | Disagree)

mudguts
I'm more interested in this than an upgrade of my iPhone X to iPhone 11.
Score: 10 Votes (Like | Disagree)

What’s the processor like? Is it the same as the Series 4?

It’s a new soc called S5 but the spec sheet says it’s 2x faster than s3 just like s4 so it’s probably as fast as or a little faster than s4.
Score: 4 Votes (Like | Disagree)

Jarman74
For folks like me who still don't have one, this is a no brainer and I finally took the plunge. This thing got so powerful that one day it will be easily able to support additional features like sleep tracking - actually I was a little surprised they didn't mention it at all yesterday as it would be a major selling point (even down the line) for those who are waiting for it.
Score: 4 Votes (Like | Disagree)

My wife has the 4 cellular and I’m really surprised just how much she utilises all the functions.

The 5 is an iteration of the 4 and probably very compelling for series 1-2 upgraders or new people thinking of buying for the first time.

I have never wanted the always on screen as when I raise my wrist it’s on and there is zero lag time. Now, if there’s an option to disable it for even longer battery life ... then I’m interested.

Over at Engadget, Dana Wolfman expressed a similar sentiment - and had asked Apple if you would turn that feature off. I noticed this morning she's updated her story to say "Fortunately, if you feel as I do, an Apple spokesperson confirms that it is possible to disable the always-on feature." ('https://www.engadget.com/2019/09/10/apple-watch-series-5-first-look/')
Score: 4 Votes (Like | Disagree)
Read All Comments