Apple's online store is back up and Apple has begun accepting pre-orders for the new 10.2-inch 7th-generation iPad and the Apple Watch Series 5. 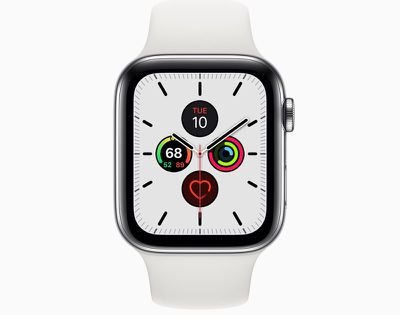 The new 10.2-inch ‌iPad‌ is similar to the 9.7-inch ‌iPad‌, but with a bigger display and a faster A10 Fusion chip. It comes in silver, space gray, and gold, with pricing that starts at $329.

Pre-orders are starting today, with the new devices set to ship out to customers on their official launch date, Friday, September 20.

metalsiren
lol trade is is insane, they only willing to give 110 for a series 4 black stainless 44.... r u kidding me, last year they gve around 250 for a series 3 to 4 trade in. sorry Apple no way am I doing that
Score: 13 Votes (Like | Disagree)

crawfish963
I felt like this year's September event was rushed, left out tons of details (no mention of hardware in S5 watch for example), and spent an extraordinarily long amount of time on the new iPhone camera as there is really nothing of note about the phone otherwise. I'm actually more disappointed than I expected to be.
Score: 9 Votes (Like | Disagree)

hexum23
Very unimpressed with this year’s releases. Very few reasons for anyone with iPhone X/iPhone XS or watch series 4 to upgrade.
Score: 9 Votes (Like | Disagree)

GadgetBen
Any reason why we can't compare the Series 4 AW with the Series 5 Apple? Could it be that there is not much of a difference?

Lets be honest for most of us this means we'll never have to pay for it.....
Score: 5 Votes (Like | Disagree)
Read All Comments

Sunday January 23, 2022 2:59 am PST by Tim Hardwick
Apple has always emphasized the depth of thought that goes into the design of its products. In the foreword to Designed by Apple in California, a photo book released by the company in 2016, Jony Ive explains how the company strives "to define objects that appear effortless" and "so simple, coherent and inevitable that there could be no rational alternative." But every once in a while even...
Read Full Article • 289 comments

Sunday January 23, 2022 10:32 am PST by Juli Clover
Apple is working on a number of new products that are set to launch this fall, and Bloomberg's Mark Gurman say that it will be "the widest array" of new devices that Apple has introduced in its history. In his latest "Power On" newsletter, Gurman explains that Apple is working on four new iPhones (iPhone 14, iPhone 14 Max, iPhone 14 Pro, and iPhone 14 Max), an updated low-end MacBook Pro, a...
Read Full Article • 137 comments