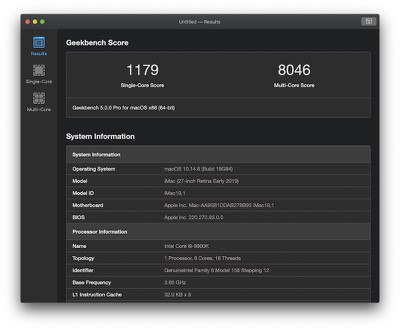 For CPUs, Geekbench 5 features new benchmark tests and it also increases the memory footprint of existing workloads to more accurately account for the effect memory performance has on CPU performance:

The Geekbench 5 CPU Benchmark includes new benchmark tests that model the challenges your system faces when running the latest applications. These tests use cutting-edge technologies, including machine learning, augmented reality, and computational photography.

Geekbench 5 also increases the memory footprint of existing workloads to more accurately account for the effect memory performance has on CPU performance.

Finally, the Geekbench 5 CPU Benchmark includes new modes of multi-threaded benchmarks, allowing threads to work co-operatively on one problem rather than separately on different problems. With the addition of different threading models, Geekbench 5 better captures the performance of different multi-threaded applications on personal computing devices.

As for GPUs, the Compute benchmark now supports Vulkan in addition to Metal, CUDA, and OpenCL.

Geekbench 5 also has a refreshed user interface with full support for Dark Mode on macOS Mojave and later. Support for ‌Dark Mode‌ on iOS 13 will be available later this year, according to Primate Labs.

Geekbench 5 is available now for macOS, iOS, Windows, and Linux, with an Android version coming later this week. The software is 64-bit only, dropping support for 32-bit processors and operating systems.

topgunn
With each version of the software, they choose a baseline machine and set the score to some number. Your device scores relative to that baseline device. With Geekbench 4, it was a Microsoft Surface Book with an Intel Core i7-6600U and the score was 4000. If you scored 2000, it was approximately half the processing power as that Surface Book. Likewise, 8000 would be twice as much computational horsepower.

I use Geekbench to quickly relate potential performance between machines. For example, I see Apple has a new MacBook Air with a dual-core 1.6GHz 8th generation CPU. Well, how does that compare to my 2012 MacBook Pro with a 2.5GHz quad-core processor. With the Geekbench results, I can get a quick idea of the difference.
Score: 10 Votes (Like | Disagree)

I think they have butchered the scores or something.
[doublepost=1567516101][/doublepost]
I am facing this similar problem too. Unusually low benchmarks.

Score calculations change between app versions. You can't compare to version 4. Only compare to other devices also tested on version 5.
Score: 9 Votes (Like | Disagree)

Does anyone really base their purchases off a benchmark?

Lets see some tests for what people really are waiting for, a better, longer lasting battery.

It's useful in-so-far as to compare two machines within the bubble that the test itself represents. Generation-over-generation performance improvement being one of the most common.

Ultimately, however, the individual's use cases have to be called into consideration, because a user with a primary application of Mail.app probably wouldn't see much difference between a dual-core machine and a 20-core machine.
Score: 7 Votes (Like | Disagree)

Just so much BS. Apple uses the ARM aritecteture for it's processors. Yes they give them sexy names (A-series!, Bionic-series!. Matrix-series!) but all Apple does is take a reference design (an ARM chip that has to do everything) and REMOVE the parts that Apple has no business in.

BTW "compared to Samsung" it's a chip everbody can use; it's f@@k all to do with Samsung

Apple DOES NOT use ARM architecture. Samsung and Qualcomm do that (using ARM cores like the A76 or A53). Apple designs 100% custom cores (micro-architecture). They have a license from ARM to use the ARMv8 instruction set architecture (ISA).

Only BS is your post which shows a complete lack of understanding of "architecture".
Score: 5 Votes (Like | Disagree)

This is the dumbest thing I’ve seen posted today regarding Apple processors.
Score: 4 Votes (Like | Disagree)
Read All Comments