Samsung today debuted a bunch of GIFs that are meant to serve as comebacks for Android users who are maligned for their green text bubbles.

As iPhone owners know, iMessages on an ‌iPhone‌ are denoted with a blue chat bubble, while SMS text messages from other devices such as Samsung devices are green. That lets ‌iPhone‌ users know who has an ‌iPhone‌ and who doesn't. 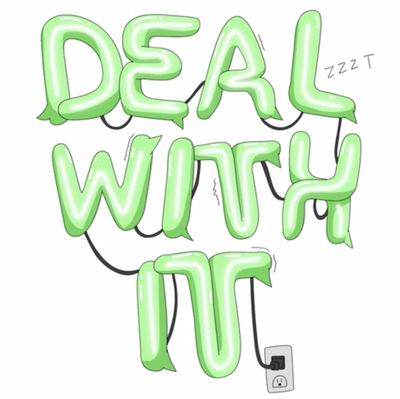 iOS users often prefer texting other iOS users over Android users because SMS messages lack many of the capabilities available to iMessage users. If you've ever been in a group text with a bunch of ‌iPhone‌ users and one Android user, for example, you've probably run into bugs and other limitations.


‌iPhone‌ users' preference for blue bubbles sometimes leads to Android users being teased or left out of conversations. Samsung's solution is, as The Verge points out, apparently a series of GIFs shared on Giphy that Android users can send to the ‌iPhone‌ users who make fun of them for green bubbles.
All of the GIFs feature weird animated green chat bubbles that range from creepy to bizarre. There's "Deal With It" green bubble lettering, a unicorn that stabs a blue chat bubble and turns it green, a green chat bubble with huge muscles showing off, an iguana that turns a green bubble blue, and more.
In many of the GIFs, green bubbles are seen as defeating or conquering blue bubbles in some way, suggesting SMS texts are superior to iMessage texts. It doesn't make a whole lot of sense.

Samsung made more than 20 GIFs that are on Giphy for Android users to take advantage of, and according to The Verge, Samsung is reaching out to Instagram meme pages to ask them to share the GIFs plus the hashtag #GreenDontCare.

Samsung's solution is, as The Verge ('https://www.theverge.com/2019/8/21/20826812/samsung-giphy-gifs-instagram-meme-makers-blue-green') points out, apparently a series of GIFs ('https://giphy.com/samsungmobileusa') shared on Giphy that Android users can send to the iPhone users who make fun of them for green bubbles.

The kind of people who would send these GIFs are the reason we avoid those green-bubbled maggots in the first place.
Score: 153 Votes (Like | Disagree)

Jim Lahey
The level of insecurity is embarrassing. Samsung are a calamity.
Score: 58 Votes (Like | Disagree)

miniyou64
I’m not even that much of a Samsung hater but wow this is cringey
Score: 49 Votes (Like | Disagree)

kurisub
I don't get it…why are the balloons plugged into a wall socket?
Score: 46 Votes (Like | Disagree)

olivertheplace
I would never reply to a green bubble. Usually the end of a friendship – haven't texted my brother in 9 years...
Score: 34 Votes (Like | Disagree)
Read All Comments