2019 iPhones Said to Feature Larger Batteries Up to 3,500 mAh, Next iPhone XS May Have Dual Nano-SIM in China

Apple is widely expected to unveil three new iPhones in just under three weeks, and ahead of time, Taiwanese supply chain publication DigiTimes has shared a laundry list of its expectations for the devices. 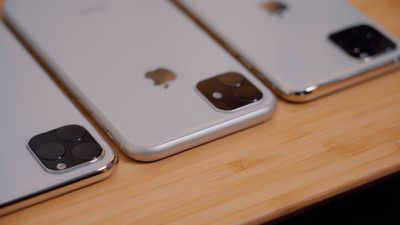 The paywalled report corroborates several existing rumors, including the 2019 iPhones having the same display sizes as the 2018 lineup, including 5.8-inch OLED, 6.5-inch OLED, and 6.1-inch LCD models. All three iPhones are said to feature Face ID, with no changes to the notch area and no 3D Touch.

DigiTimes also expects the 2019 iPhones to feature A13 processors manufactured based on TSMC's 7nm process, two-way charging of wearables like the Apple Watch and AirPods on the back of the iPhones, and new colors, in line with a previous rumor of new green and lavender finishes for the next iPhone XR.

The report adds that battery capacities will increase to around 3,200 mAh, 3,500 mAh, and 3,000 mAh for the next iPhone XS, iPhone XS Max, and iPhone XR respectively, which would be around 20 percent, 10 percent, and two percent larger than the batteries in the equivalent 2018 iPhones.

Korean website The Elec previously claimed the next iPhone XR will sport a 3,110 mAh battery, which could still be accurate given that DigiTimes appears to be roughly estimating its reported capacities.

Much of this information has already been outlined by respected analyst Ming-Chi Kuo, including two-way charging and battery capacities increasing by roughly the percentages outlined above, but this information from the DigiTimes Research division in Taiwan adds further credence as the new iPhones near launch.

All three iPhones feature dual SIM support in other countries by way of a single nano-SIM paired with an eSIM inside the device. This functionality enables iPhone users to have two phone numbers available at once, which is useful for travel or having both personal and work lines on a single iPhone.

Tuesday, September 10 is the widely predicted date of Apple's event, with invites to the media likely to be issued towards the end of August. MacRumors will have live coverage of the keynote as usual.

Confirmed: No reason to upgrade from an XR.

Dude, there never is, or was.
Ride your XR to its sunset.
There is plenty of liveliness on these disposables for a three- to four-year cycle.
But, just my opinion.
Score: 18 Votes (Like | Disagree)

rpat701
Confirmed: No reason to upgrade from an XR.
Score: 11 Votes (Like | Disagree)

B4U
How about dual SIM for the rest of the world?
Score: 10 Votes (Like | Disagree)

urnotl33t
Still rocking my iPhone SE. These device shells with the giant camera wart look awful; painfully awful. At this point, just make the whole shell *that thickness* if the camera system is now gonna be *that* big. Expand the shell, and Make iPhone Flat Again! #MiFA
Score: 9 Votes (Like | Disagree)

hlfway2anywhere
Cool, i'm even more excited to not upgrade this year.
Score: 7 Votes (Like | Disagree)