Apple's health team has faced a series of "high-profile departures" in the past year due to internal disagreements about direction, according to CNBC's Christina Farr, who cites multiple people familiar with the matter. 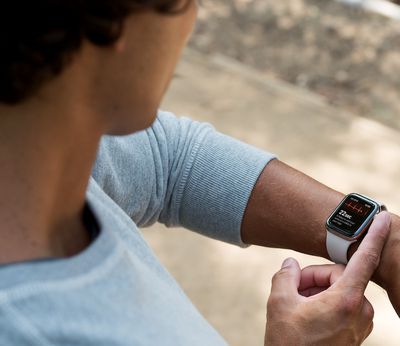 The report explains that some Apple employees feel the company could be taking on more ambitious health-related projects like a telemedicine service or simplified insurance billing, while others are satisfied with Apple's focus on wellness and prevention like its ECG app for the Apple Watch:

Tension has been increasing in the health care team in recent months, according to eight people familiar with the situation, although that undercurrent started several years ago. Some employees have become disillusioned with the group's culture, where some have thrived while others feel sidelined and unable to move their ideas forward. Four of the eight noted that some employees hoped to tackle bigger challenges with the health care system, such as medical devices, telemedicine and health payments. Instead the focus has been on features geared to a broad population of healthy users.

The report acknowledges that it is unclear if the attrition rate within the health team is higher than that of other teams at Apple, so part of this could be normal day-to-day differences in opinions and turnover that a large company faces.

When the ECG app for the Apple Watch was unveiled last year, the report claims that some employees were "frustrated" by the negative reaction from some doctors and others in the medical industry, as these employees are said to have pushed for a "small and focused product launch" that would have involved gathering feedback from the medical community to reduce any potential pushback.

Apple did, however, secretly invite cardiologists and other medical experts to its headquarters in California every six months or so while the ECG app was under development, according to the report.

A recent employee morale survey within Apple's health team apparently "showed signs of discontent," leading Apple COO Jeff Williams to speak with several employees to address their concerns. Williams has overseen the health team at Apple for several years, including development of the Apple Watch.

Leadership changes also may have contributed to some of the recent departures.

Most of the employees who left the health team worked under Desai, per the report:

Other high-level departures from the group over the past few years are Robin Goldstein, who was at Apple for more than two decades and most recently worked on the regulatory side of health before leaving in late 2017; Anil Sethi, a former Apple Health director who left to form a health-tech start-up in late 2017; Stephen Friend, a top Apple researcher who departed at the end of 2017; Charles Schlaff, who worked on Apple Watch before moving over to special projects and left in November of 2018, according to LinkedIn; Craig Mermel, who was in engineering at Apple Health and left to join Google Brain this February; and Yoky Matsouka, who was brought in to lead health but left after less than a year in 2016 and is now a vice president at Google.

Despite the reported struggles, Apple's health team has accomplished a lot over the past few years, including the potentially life saving ECG app for the Apple Watch and Apple Health Records. Apple CEO Tim Cook has said these health efforts will be the company's "greatest contribution to mankind."

Baymowe335
This is life in corporate America.

This is the biggest non story ever.

That said, I’d agree that moving heavy into billing, insurance, or other nitty gritty healthcare related endeavors is questionable.

The healthcare industry is a cluster. Apple needs to focus on the information, tracking, and features aspects to healthcare. Not billing patients and providing insurance benefits. That’s a cluster.
Score: 26 Votes (Like | Disagree)

NMBob
I'm starting the rumor that some people in management wanted to have Micky Mouse tap his foot in synch with your heart rate. Worker Bees didn't like that.
Score: 15 Votes (Like | Disagree)

Apple Knowledge Navigator
Too many Chiefs, not enough Indians
Score: 14 Votes (Like | Disagree)

Rogifan
I’d much rather see Apple expand in the health space than original TV content.
Score: 9 Votes (Like | Disagree)

mannyvel
The problem with the healthcare industry is that everyone talks about better healthcare, but the principals involved don't want to change their behavior. That includes everyone: Providers (Doctors), Payers (insurance companies), and Patients (you and me).

In any case Apple isn't in a position to advocate for change in the healthcare space, so kudos to management. As a platform company they should be an enabler, and they're doing that quite well.
Score: 9 Votes (Like | Disagree)
Read All Comments

Sunday May 22, 2022 1:57 am PDT by Sami Fathi
Apple has silently increased the price of its Apple Music subscription for college students in several countries, with the company emailing students informing them their subscription would be slightly increasing in price moving forward. The price change is not widespread and, based on MacRumors' findings, will impact Apple Music student subscribers in but not limited to Australia, the...
Read Full Article • 180 comments