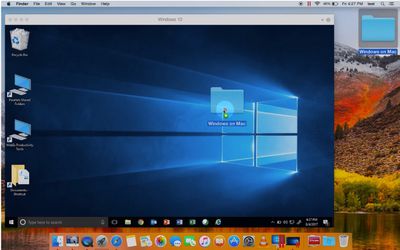 The switch to Metal should bring a noticeable performance boost – Parallels claims 3D graphics rendering is up to 15 percent faster, while Microsoft Office apps should launch up to 80 percent faster.

The enhanced graphics support also expands the number of Windows apps that users can run on their Mac, such as Autodesk 3ds Max 2020, Lumion, ArcGIS Pro, and Master Series.

Gamers meanwhile can look forward to running their favorite titles at faster speeds, with the likes of FIFA 19, Age of Empires Definitive Edition, Fallout 4, Madden NFL 19, Crysis 3, and Mark of the Ninja: Remastered all receiving special mention.

Once macOS Catalina launches in the fall, Parallels' ‌Sidecar‌ support will mean users can wirelessly connect their iPad to their Mac to use as a second display in Windows. There's also new Touch Bar options for Apple Pencil, including Toggle between Pen, Eraser and Mouse modes. Parallels says support for additional Catalina features is currently in development and will be introduced around the release of macOS 10.15.

Notably, the virtualization software is offering better integration with macOS more generally, such as the ability to use screenshot previews in Windows applications and the ability to drag images from Safari, Photos, and other stock Mac apps.


Elsewhere, there's now support for the Share menu in Finder, so it's possible to send files from macOS using a Windows email application, and there's now Keychain support, offering quicker login to websites and apps within Windows. A more comprehensive list of changes and improvements in Parallels Desktop 15 is available here.

Parallels Desktop 15 requires macOS Mojave or later to run, and can be purchased for a one-off fee of $99.99, with the more feature-laden Pro and Business editions available at $99 per year.

Users with older versions of Parallels Desktop (including Pro and Business Editions) can upgrade for $49.99, while college students in the United States, Canada, Germany and UK have access to the reduced price Student Edition. A 14-day trial of the virtualization suite is also available.

Yeah, after a few years this really started to annoy me. They’d release a new version but fail to fix critical bugs in the existing version (which was otherwise fine)... and then force you to upgrade.

After the upgrade you then discover that the same bug hasn’t been fixed, rendering the entire VM unbootable and unfixable... again.

satcomer
I will hold my praise until I see it tested! Silicon Valley lies are really get on my nerves!
Score: 12 Votes (Like | Disagree)

I had Paralles subscription.
It’s nice but for personL use is overpriced.
Support is terrible especially if u plan to use linux.

Most of the features are Windows only oriented and this os where it lags behind others.

Unfortunately, GFX-wise, Parallels wipes the floor with VMware Fusion. I use ESXI, vSphere, Workstation etc, but Fusion is just slower than Parallels.
Score: 11 Votes (Like | Disagree)